Let's be real, youth has ALWAYS been the engine that drives Pop Culture. Even the Jazz Age was fueled by flappers and champagne, as hair and skirts got shorter and shorter while the music got hotter and faster. Youth, and especially adolescence, drives change and questions the status quo. They also define what is "hip" or "cool" as much of it was designed to be sold to them in the first place. As much as major institutions like Billboard and the Grammys and even the VMAs would love to pretend they are the tastemakers, that they are steering Pop Culture, the fact of the matter is that the Next Big Thing is more likely to be found on TikTok, especially these days.

The downside to all of this, of course, can be a lack of experience or perspective. Teenagers simply haven't had as many years to become masters of their craft. They also might lack an understanding of how the world works, which can lead to some, at times, fairly cringey decisions.

But what happens when you blend youthful style and taste with pro-level skill? The short answer is - anything at all.

British singer/songwriter/rising Pop Star Alfie Templeman's skills truly transcend his age. Not even 20-years old, Templeman is already an accomplished multi-instrumentalist and producer. He recorded his first EP, Like an Animal, when he was only 15 in his bedroom after school. He was playing at the Brixton Academy by 16.

Impressively, Templeman's star has only continued to rise. His next EP, Happiness in Liquid Form, found Templeman collaborating with a number of equally talented labelmates, like Jess Eastwood of Coach Party or Justin Young of The Vaccines, which got named "The Hottest Record in the World" on BBC 1.

Part of the reason Templeman's blowing up so much is because he never stops. He's relentlessly creative, with a work ethic to match. Recently, he's released yet another mini album, Forever Isn't Long Enough, which he's also been busily promoting. Most recently, he's released a video for "Everybody's Got To Love Somebody" with its surprisingly moving Muppet action.

Alfie Templeman's only going to keep getting bigger. He's already improving on the glo-fi 80s worship of bands like Mac Demarco or Tokyo Police Club - but better. It could be argued that he's improved upon the OG 80s bands themselves, like Simple Minds or New Order. Alfie Templeman's finding that perfect balance between mellowness and melodicism, sharpness and slack. 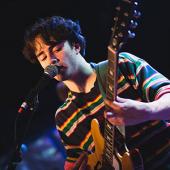