Binki's short, punchy tracks are made for the dancefloor. They’re noisy and raw. Catchy and funky. Melancholy and yet still uplifting. And it’s not just that all of binki's songs sound different from one another — each song is a standalone hodgepodge of diverse personalities. This is all thanks to the wide range of artists that binki taps into for inspiration. From Andre 3000 to David Bowie to Lou Reed, binki's biggest influences aren’t afraid to mix and match genres.

And binki himself is no different.

Today’s Featured Find creates a wide sonic landscape, from wavey dream-pop tunes like “Landline” to in-your-face punk anthems like “Revolve.” Perhaps binki's sound reflects his own unique, winding journey to arrive at the present day. He was born in Pennsylvania, the child of Kenyan immigrants. Then, binki traveled southward, studying theatre at the University of North Carolina. Finally, he returned to the northeast and settled down in Brooklyn, a city home to many artists like binki who defy the constraints of adhering to specific genres. Now, binki wants to carve out his own niche within this globally renowned music culture. And he’s taking you along for the ride with a cohesive 11-minute EP titled “MOTOR FUNCTION” — his first officially-released project.

“My favourite art is introspective and deeply personal,” binki told NME. “I want my fans to grow with me.”

It hasn’t been an easy journey for binki. As he told Complex, binki has struggled with self-worth, at times feeling like an imposter in the music world. But that’s a feeling that many artists experience. Binki is relatively new to this industry, having released his first song “Marco” in 2018. He still has a lot of self-discovery to do.

“I thought about what I wanted my career to look like, and realised that I’m not in a rush,” binki said to NME. “I just wanted to make sure that I’m always growing.”

Seeing how “MOTOR FUNCTION” is just one of binki's first steps in his journey toward musical self-actualization, we can’t wait to see what comes next. But we already know that no matter how much binki branches out and experiments with new styles, he will always stick true to himself. 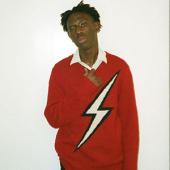