FEATURED FIND: BOYU IS TOO POP FOR THE INDIE KIDS, TOO INDIE FOR THE POP KIDS

Gen Z has no time for labels. This has already shown itself in the manner that "zoomers" (barf!) have helped to question and challenge rigid gender and sexuality norms more so than any other generation before them. A desire to not be categorized is also evident in Gen Z's approach to making music. Bored of stubborn, immovable sonic boundaries that offer little to no space for experimentation, Gen Z creatives have shifted away from a fixed to a fluid artistry that doesn't simply defy the rules of genre, but abolishes them altogether. One such artist is Boyu, the genreless upstart whose Spotify bio cooly reads as follows: "Too pop for the indie kids, too indie for the pop kids."

Hailing from Los Angeles, Boyu was initially trained in classical piano before turning his attention to drums, guitar, and digital production. With this newfound range of tools at his disposal, Boyu set about releasing his debut single, "Flower Garden," in April 2021. Described by Boyu as an ode to "ending toxic relationships and manifesting self-empowerment," "Flower Garden'' is a genuinely joyous bedroom-pop bop that delights in its blend of the organic and the electronic. With his melodically knowing voice coming dipped in Auto-Tune amid buoyant beats, "Flower Garden'' was a runaway success despite not fitting into any one box, clocking up over 155,000 streams on Spotify.

Boyu continued to build on the success of "Flower Garden" with the release of his second offering, "Hands Around Your Throat," in July. Like "Flower Garden" before it, "Hands Around Your Throat" was written while in lockdown alongside his frequent collaborator Zenii. Unlike his darling debut single, however, "Hands Around Your Throat" intentionally showcases a grittier, darker side to Boyu. Clocking in at just under two and a half minutes, the song hears the 23-year-old referencing a love for hip-hop, with Boyu explaining that he wanted "to flip the image a complete 180." And flip it he does, with the singer-rapper at one point spitting out a verse with a tongue as sharp as a switchblade.

While previous generations have seemed intent on containing and suppressing artists and creatives into neat little boxes and pigeonholes, it's truly liberating to be finally entering an age in which curiosity and experimentation are not only allowed, but actively encouraged. Despite being just two songs into his career, it's clear Boyu is quite confidently leading the charge with his undefinable, unstoppable bedroom-pop treasures. And with a debut EP due out in merely a matter of weeks, the Los Angeles act is looking set to continue taking risks and demolishing restrictive barriers well into fall and beyond. We Are: The Guard recently sat down with Boyu to learn more.

WE ARE: THE GUARD: Hey Boyu! Thanks so much for taking the time to chat with us. We're big fans of your music, especially "Flower Garden." Can you tell us about the process of writing and recording it?

BOYU: Thanks for having me - super stoked that y’all vibe with my music! I wrote “Flower Garden” back in August of 2020 about a friend who had just gotten out of a toxic relationship - one of those emotionally abusive ones that drains the life out of you. Inspired by her story, I wanted to create an empowerment anthem that could uplift spirits and boost self-confidence. As I was writing, the concept of someone crying tears to water a flower emerged in my brain, and that imagery was exceptionally beautiful to me - something so utterly sad resulting in something so pleasant. My producer and I recorded everything in a bedroom setup and at the time I would drive from Boston to NYC every other week to work on my songs with him. My favorite part of the song is probably the outro, inspired by Childish Gambino’s “Redbone”. Sonically I wanted to exhibit the feeling of breaking free with a cathartic belting vocal release at the end, so I took 4 shots and screamed random melodies into the mic until we found one that sounded pretty.

WE ARE: THE GUARD: The music video is stunning! Can you tell us about the process of filming it?

BOYU: Thank you! The team and I are super proud of it! We filmed this in February of 2020 one day after shooting the “Hands Around Your Throat” MV. The crew drove from LA to Joshua Tree, where we started with the outdoor shots around noon. We basically filmed until sundown, ensuring all the angles and green screen windows were spot on. We then moved into a beautiful AirBnB in Yuca Valley where the PD and AD went bonkers with the set design. As the MV narrative progressed and the relationship rekindled, the background florals and leaves grew in tandem. Jaia and I also coordinated our monochrome outfits for every scene weeks prior. The entire shoot took ~15 hours and ended around 3AM. We were exhausted but reflecting back, I wouldn’t change a thing. Having the crew take my audio and transforming it into a short film type MV in a matter of weeks still blows my mind and makes me smile everyday.

WATG: Your latest single "Hands Around Your Throat" definitely showcases a darker side of your music. What was it like to write and record that one?

BOYU: I wrote “Hands Around Your Throat” back in April of 2020 after going through some archived Snapchat memories of my study abroad experience in Singapore. While there, I met a local Singaporean chick who expeditiously roped me into the underground nightlife scene. She was wild & had all the connects in the city, from backdoor club entrances to free booze & benzos. Like all my songs, I like to tell stories and “Hands Around Your Throat” is no different - starting with a description of the chick in V1, inebriation at the club in V2, whirlwind of distorted conversations in V3’s rap, to ending in bed - all while attempting to answer the question of the chorus “why my hands around your throat”. Recording this record was super fun and experimental. Initially the song was a blackbear inspired dark pop tune, but a few listens in, I knew something was missing - we needed more edge! Born was the rap verse and dark 808’s. I knew that people would be shocked to hear this as the 2nd single after such a wholesome uplifting 1st debut of “Flower Garden” but hey, that’s the fun part about being the artist - I can express myself however I please!

BOYU: I have 3 more songs & visuals to release before the year ends & I’m sitting on a goldmine of records that are hiding in the vault for 2022. I also moved from Boston to LA ~3 months ago with a goal of getting signed by EOY, so let’s manifest this together!

BOYU: Musically, Dominic Fike and Roy Blair. They gave me the confidence to sing and rap on the same song while synthesizing hip-hop elements into pop music.  In life, my friends inspire me. My close homies are all super proud that I’m out here in LA doing this ‘music thing’ and it feels good knowing that they’re all rooting for me back home.

BOYU: My producer Zenii and I have this saying:  “it’s meant to be” and “everything happens for a reason”. Kinda cliche but both have been so applicable at every point my life - positive or negative.

WATG: To end with a fun one, if you could invite any 3 people to a dinner party -dead or alive- who would you choose? 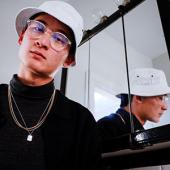