The first line of Deb Never’s “Where Have All the Flowers Gone?” epitomizes a raw feeling that echoes throughout her debut album: “I’m so stupid/I can’t get through this.” She’s heartbroken, and this 25-min project allows you a personal glimpse into her recovery as she learns how to love again.

DEB NEVER - WHERE HAVE ALL THE FLOWERS GONE? (Short Film)

“I’m a hopeless romantic,” Never told NME with a laugh.

Never never holds back when describing her own struggles, from numbing herself with substances on “Sorry” to not recognizing herself in a mirror on “Funky.” To her, music has always been a release. A journey to undercover her honest self. Up until her adolescence, Never struggled to communicate due to her severe anxiety. That is, until she began writing songs on a stolen church guitar at age 15.

“That was the only way I could speak,” Never said in an interview with Fader.

DEB NEVER - SOMEONE ELSE

Today’s Featured Find covers an artist whose versatility with different production styles, from grunge to hip-hop, allows her to seamlessly weave between restrained emotion and explosive expression. The first single from her album, “Someone Else,” kicks off with ethereal guitar melodies that draw you in before the track reaches a driving drum ‘n’ bass climax as she frankly admits that she doesn’t want to see her love “with someone else.”

That honesty is one reason Never has captured the attention of some of hip-hop’s most exciting up-and-coming artists, like Slowthai. The Northampton-born rapper featured Never on the track “push” from his latest album. Never delicately implores us to “sit back and watch the rain/breathe out before tomorrow/slow down before you break/and you’re cast aside.” As Never’s voice floats over a lightly strummed guitar, she invokes images of the legendary Beth Gibbons of Portishead (who also happens to be one of Slowthai’s biggest inspirations).

“Where Have All the Flowers Gone?” was born during the pandemic that caused Never to feel lost and alone, a feeling shared among people around the world. While working on this project, she herself traveled across the globe from London to Los Angeles, searching for inspiration in a time when Never struggled to appreciate herself. Nonetheless, she still recognized that beauty exists in this world. And with an honest inner monologue supported by simplistic musical progressions that reached cinematic conclusions, this album follows Never as she arrives at a place of acceptance.

Never’s honesty has always defined and distinguished her. And as Never grows as an artist, it will elevate her to even greater heights.

DEB NEVER - WHERE HAVE ALL THE FLOWERS GONE? 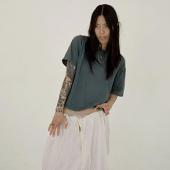