I live at a Southern California beach, so it’s contractual, upon signing a lease round here that I “must get down with dub and reggae.” I balked at this clause after initially seeing it in legalized print, but later came to understand the significance (and need) after two years living adjacent to sun and surf and good times and vibes.

DENM’s Slum Beach Denny is a beach album through and through. One you put on when lounging with the boys and some brews and not a care in the world except all of those in your past, and even those don’t feel so bad on this fine day. This sixteen track record certainly rides the line of dub and reggae, while also having another foot firmly planted in the realms of alternative rock and hip-hop and even ska (yes, they are different see Aaron Carne’s In Defense of Ska for more information).

DENM is a chameleon, who, yes, possibly has spent too much time at the beach over the past twenty something years (is that even possible?) of his life. And while that time commitment sure comes across on this record, it’s not what defines him. Or is it?  I guess give these tracks a spin and see if they transport you to the ocean of your mind.  Cause they sure do for me.

Getting that Dirty J feature on your debut record is like an up and coming rapper getting co-signed by one of the hottest MCs in the hip hop game. Is “Califas” DENM’s “W.A.P.”?  Is DENM alterna-reggae’s Megan Thee Hamilton? Am I pushing too far on a metaphor that doesn’t really work? Track #2 gets the record going hot and it doesn’t let up much from there either. “Califas” IS a beach anthem. For those who have been Dirty Heads fans for years and those who are just getting into them now via the grunge-tinged influence from hanging out with DENM. This is a collaboration that elevates both artists into absolute banger territory. “Califas” slaps.

“My Wave” is dope and chill and everything you’d want out of a tune that doesn’t give the remotest of a care whether you're listening to it or not. This is lounge music for your day off. Put this one on in the morning (or afternoon) and lay out in the sunshine and without even realizing what has happened “My Wave” will become your quintessential song of 2021. The reggae is muted here as opposed to the rest of the record, letting DENM’s alternative side take front and center while still staying true to the reggae roots. Subtle if you let it be. Maybe “My Wave” is THE reggae song for people who’ve always complained about the genre. Or maybe it’s just heightened by all the influences DENM has put on display here. Whatever the case, “My Wave” is gonna be the one song you can’t shake off your playlist all summer long. And why wouldn’t you want to? Just ride that wave.

I mean, there’s no doubt that Sublime will always be kings of alterna-reggae, but there’s also no question that any cover of “Badfish” this badass deserves a place in the conversation. DENM is channeling Bradley Nowell in a way that even Rome can’t keep up with. Not saying we should be considering Sublime with DENM instead of Sublime with ROME but I ain’t hating on it either. The track starts parallel enough to the original, before adding in drum machines and spacey synths that change the track into it’s own version of something completely original. Feels equivalent to Sublime’s cover of “Scarlet Begonias,” which is, from me, as good of a compliment as it gets.

That’s not all though. Three tracks is hardly enough room for us to cover the variety featured on this album. Because it’s ultimately a reggae record, we chose to focus on those more reggae elements here. But all of that aside we’d feel remiss if I didn’t at least mention the handful of hip-hop tracks littered throughout, mostly interludes (and the outro), but also JAG just full on with verse and hook on “Say a Prayer.” Slum Beach Denny has featured verses from Casey Veggies, Sword Beach, The Patten, and Darnell Williams. They all rip. Sure, they stray from  the more traditional reggae formula of the rest of the record but also ultimately end up deepening the album as a whole in process.

Listen to the whole thing and it feels complete, like a mixtape your friend's older brother made for you. Alone, the songs all rule too. But DENM genre-hopping like he knows no bounds? That’s true beach life. 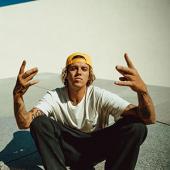