FEATURED FIND: DIJON IS NO LAUGHING MATTER ON “RODEO CLOWN”

The cover of Dijon's most recent single, "Rodeo Clown", shows two pals chilling on the sofa - one in street clothes and the other done up in greasepaint and rainbow socks. It's a surreal, almost silly image, that's made even more convoluted that it has little to do with the name.

To truly get at the heart of "Rodeo Clown", you have to pull out the cold cream and really scrub. After a liberal application of elbow grease, you might be surprised to find a soulful r&b crooner with some Country and Western flourishes - weeping slide guitars  and little bits of melodic bass. Make no mistake, though, weepy tear-in-my-beer country music this is not. If it is country music, it would be of the cosmically weird variety innovated recently by Orville Peck.

Don't let that short description lull you into a false sense of comfort, though. Take "Many Times," the other most recent single from Dijon's new album, Absolutely, which is due out this coming Friday, November 5. "Many Times" sounds nothing like "Rodeo Clown" barring the presence of Dijon's signature emotional vocals, which strain and crack under the pressure of his big, big heart. If we were to make a comparison, it would be The Internet's Patrick Paige II turning in a funkadelic cover of Don Henley's "The End Of The Innocence."

The only thing you can expect from Dijon is you just never know what to expect. Whatever it will be, it will be unique, personal, and interesting.

Dijon is a perfect microcosm of today's indie/singer/songwriter scene, which is broad enough to encapsulate both Olivia Rodrigo to Billie Eilish. After several decades of having non-stop access to nearly every note of music ever recorded, the totally artificial dividing lines between genres, styles, and scenes are drying up faster than a Saharan Oasis. Like the harlequin on the cover of "Rodeo Clown," sometimes you just gotta peel off the paint and see what you're working with.

We Are: The Guard see you, Dijon, we really do! 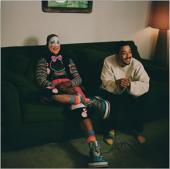