FEATURED FINDS: DILIP X OTXHELLO ARE PULLING BEATS OUT OF THE ETHER

Late year (stylized late year) have got some tunes to play for you.

Separately, Dilip and Otxhello are killer producers, who have been banging out massively mellow beats for acts like Soulja Boy, Lil Pump and HoodRich Pablo Juan (amongst others) for the better part of the last two years. Truth is, they probably could have had a long and lustrous career behind-the-scenes, studio masters without the shot at building much of a name for themselves...

But, like out of nowhere, a universal shift landed in the way we handle ourselves, and you, me, Dilip, Otxhello are all trapped at home for months and months on end. Call this an opportunity, right? Many of you claimed to want to channel William Shakespeare at the start of the pandemic quarantine, noting that the bard wrote King Lear while under his own lockdown. What ever came from that venture? Huh? Scrawled notes buried somewhere under couch cushions? Exactly.

Otxhello and Dilip stayed motivated during this time of relative stagnation and wrote seven beautiful beats, merging indie hip hop with jazz and idm and ethereal soundscapes and most definitely a whole hell of a lot of soul to create a sound that’s uniquely coming from an act worth considering on their own merits. Late year is an emergence from a studio cocoon as a beats butterfly. I’d say they came out of nowhere, but that’s not really fair if you actually take the time to dive back into their production catalogue of chill as hell hip hop music.

History aside, these are seven goddamn fantastic tunes. On repeat in my headphones, the kind of tracks that can be equally beneficial for studying and partying (at which writing this article is both). Not since TNGHT’s 2012 eponymous release has a beats-centric release come so self-assured and ready for world domination. But perhaps we need to go back even a bit further? With late year’s cover art seeming to channel Madlib’s turn as Quasimoto. No matter what the case, wear your influences on your sleeve Dilip and Otxhello, because we’re glad to get an education with this one.

“sinking @@!” merges genres better than any track I’ve heard in a long time, with violin bows playing us out from fluttering trap breakdowns, this is a journey worth going on. Dilip and Otxhello open their release with a song that sets the mood. Hit play and you’ll be rewarded out of the gate with an indie electronic hip hop song that lets you know the rest of this thing is also going to be worth listening to. Yet, “sinking @@!” has merits of recognition in its own right. The kind of track that will recur in my shuffle and have me wondering who the hell it is over and over again -- a constant reminder to check the artist and be astonished by how much of an effect Dilip and Otxhello have had on my listening habits.

“freeze ^√ ~” is funky.  Need those funky basslines in a tune to really set my mind at ease. This track stands out for having a true groove, while the others have a bit more spacey of a sound going. What this demonstrates to me is that they really can do it all. Halfway through the release a listener might think they have a handle on what these two are capable of, but here it takes a little turn toward something else entirely (while staying cohesive to what the record as whole sounds like). Dilip and Otxhello aren’t about to be pinned down by anything on their first major release. This is just the beginning for these two. Now we just can’t wait to see where it goes...

We Are: The Guard: As 2021 begins, do either of you have any New Year’s resolutions?

Otxhello: For me personally, I definitely want to work out more...just to keep my health up. I want to eat healthier and read more. Music wise, I have artists in mind who I want to work with. Just dropping consistent music and collaborating is a big goal for the year.

Dilip: I want to learn how to cook more and I want to focus on making more solo music in the future. I also want to keep working on building artists.

WATG: Can you each tell me about your background in music?

Dilip: I started playing instruments at a young age. Piano, guitar- I just picked it up. In school, I did band class and stuff like that, so I was always playing instruments. Making music just made sense. When I was in middle school, I’d use the GarageBand iPad application and I would make beats on there. Fast forward to the end of high school, I was getting better at making music and releasing it on the internet, and that’s how it started for me.

Otxhello: I’m kind of the same way. My parents introduced me to a lot of the music I like now and they’d give me piano lessons. I tried to play the cello, but I was never really that interested- I wanted to do sports. Around high school is when I discovered producing music on my computer, and senior year when I graduated, I realized what I wanted to do.

WATG: How long have you two been working together, and how did you meet?

D: We’ve been working together for 3-4 years now. We first met on SoundCloud basically. We had a mutual buddy named Daniel who goes by yugi boy on SoundCloud and he connected us. We had a show in the Bay Area and Otxhello flew out. We met in person and made a bunch of music. It was just natural.

D: A lot of different music influences, but what really made us bunker down and make it was being in the house (because we live together). Doing the whole COVID-pandemic thing, we were really locked in and working on music every day in the house and feeling inspired.

WATG: What was the creative process like when creating Late Year?

D: We already had a lot of song ideas from the past that we had been sitting on, so we re-visited ideas and once we had a solid 2 or 3 tracks and were like “Ok this could be sick for a project,” we had a better idea of what direction we wanted to go with the rest of the album.

WATG: Who are some of your inspirations?

O: Stevie Wonder is #1 for me. Kanye, Kirk Franklin. I really like gospel music and jazz, like Bill Evans.

D: Mr. Carmack is one of my biggest influences in general. He’s crazy and always keeping me inspired to make music.

WATG: You guys produce for others and also put out music yourselves. Did you always envision doing both?

D: To be honest, not really. When I first started making music, I didn’t have a plan for it. I just did it, and when I put it out, I didn’t expect anything to happen. Once people started noticing, I really started to think I could do this and that’s when more avenues started opening up, like working with artists and doing different things like that.

O: Same for me. I did want to produce for artists, but I just didn’t know how it would be possible, so I didn’t think about it that much.

WATG: Do you have any advice for aspiring producers?

D: The biggest advice I could give a producer is to stay motivated, however that may be for you. Stay inspired by experiencing life. That’s a big part of staying creative.

O: To piggyback off of that- music for me can be stressful sometimes, so one thing I’m working on is not taking things too seriously, and remembering to have fun, because I’m doing something that I love.

WATG: That’s great advice. I recently had a call with an artist who said something similar along the lines of “the only reason any of us decide to do this is because at one point, we thought it was fun, and it should be fun!”

D: Sometimes you can get so caught up in the work, and trying to achieve something when really, you should be enjoying it.

WATG: What’s on your playlists? What are you listening to?

D: I’m listening to a lot of old-school R&B, and whatever I think is fire. I’ll throw it in the playlist. A lot of underground hip hop.

O: I’ve been listening to a lot of Hudson Mohawke and this artist that yugi boi showed me called Lenny White. Pretty fire.

WATG: I’ll have to check them out! Do you think there will be a new music trend for 2021?

D: I feel like there’s a new music trend every few months, but do I know what it will be? I don’t think I know! I think that’s what makes it a trend.

Late year is out now on all streaming platforms! 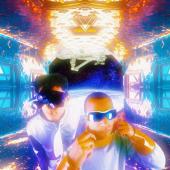