FEATURED FIND: DOG ORCHESTRA RETURN WITH A HOPEFUL, POETIC SINGLE- “I WAS HAPPY ONCE”

Scandinavian synthpop expatriates Dog Orchestra return with their brightest, most hopeful single yet on "I was happy once."

Swedish-by-way-of-Berlin synthpop duo Dog Orchestra have cultivated an interesting tension, between sweetness and darkness, from the very start. Dog Orchestra first came to public attention with "Broke," an anthem to capitalistic despair, of not even being able to afford to being in love, let alone "Lower Eastside haircuts, sushi rolls, snakeskin boots, poolside Chardonnay, or an 18k Jesus."

And yet, despite singing about essentially being doomed to loneliness and privation,you'd never know it from the sound of "Broke" alone. Instead, Dog Orchestra's breakout 2016 single, which gathered rave reviews everywhere from Vice Magazine to right here at We Are: The Guard, sounds lush, warm, nearly euphoric, with its crystalline reverb and glowing, resplendent synths. "Broke" may be surrounded by cold and darkness yet its very much wrapped in a protective nimbus of warmth and light, drawing on a rich tradition of Scandinavian Pop ranging from ABBA to Bjork.

This mixture of often contradictory emotions runs throughout Dog Orchestra's debut EP, Meow, as well as the handful of excellent singles they've released in the last 5 years. Even though the description sounds like a bit of a downer, it really ends up that there's something for nearly everybody - club-friendly pop music for remembering or forgetting.

With "I was happy once," Dog Orchestra seem to be tweaking the formula some, tipping the scales in favor of the optimistic (despite the past tense the title suggests.)

DOG ORCHESTRA - “I WAS HAPPY ONCE”

"And so I stood up on the ledge and said, Behold, I am Lazarus, come back from the dead. I have come back to tell you all, I know we can go," intones a spoken vocal over a rising crescendo of mind-obliterating synth, like the ecstatic gospel of Prince's "Let's Go Crazy" or Kanye's Donda. "And I was free." with only the barest hint of an epic guitar, the outline of a beat, and some of Dog Orchestra's signature arpeggiated synths.

It's truly a unique choice for a lead single, streamlined and crescendoing instead of DO's usual verse-chorus-verse poptimism. "I was happy once" sounds cinematic, grandiose and uplifting. It's more like a teaser and trailer than your usual radio-friendly single.

Only one thing is certain - Dog Orchestra seem to be embarking on a whole new chapter. "I was happy once" is the opening stanza, its battle cry and invocation. It's the lead single from a new EP due out in 2022. We Are: The Guard could not be more excited to hear what they have in store!

We chatted with Daniel from Dog Orchestra about “I was happy once,” inspirations, and more.

WE ARE: THE GUARD: Hey Dog Orchestra! Thanks for chatting with us. Congrats on the release of "I was happy once." How does it feel to be releasing music again?

WE ARE: THE GUARD: Can you tell us about your creative process in writing, recording, and producing the song?

DOG ORCHESTRA: I remember it was one of those songs where the title came first. After that, the song sort of wrote itself over the first couple of hours. We had a set up that was horrible in terms of acoustics- a sparsely decorated living room with lots of bare surfaces- but the atmosphere/mood has always been more important to us that the technical stuff. I think in that sense, we’re more songwriters than producers since we don’t mind if it sounds awful to begin with as long as we can hear what it could sound like. Then, of course, Jeremy Dawson got involved and helped to push the song that very important last stretch.

WATG: We're loving the poetry of the lyrics- reminds us of if Leonard Cohen and Radiohead crossed paths. When did you write the lyrics? Did it come all at once? Is this a story you two share or more so one of yours?

DO: It’s based on my experience of a night out that we had when we were living together in Berlin. Unlike a lot of our songs, it’s pretty specific and loyal to reality in terms of narrative. The lyrics were maybe 80% finished after the first couple of hours and the rest was a fragmented process of listening and searching for the missing words. David Lynch said something like the creative process is like being in a room with a jigsaw puzzle on the other side of a wall and all you get are a few pieces and you have to try to figure out what it’s supposed to look like. I like that analogy, feels like that a lot of the time when we try to finish songs. The song is already there in all it’s glory, we just have to try to find it.

WATG: How did two get started in music, both as individuals and together?

DO: Individually, I’d say we both started playing guitar sometime around high school, but we didn’t do anything whole heartedly until we started playing together several years later. I had moved back home after studying in Australia and joined a band that Niklas was in with two other friends - subsequently messing up their dynamic causing the band to split. Then me and Niklas moved in together and started a new band. Then we started another band - that was DO.

DO: Friends. Other artists. People who try their best to do good with whatever their thing is.

DO: David Bowie, Iggy Pop, and Niklas. Just to settle some things. 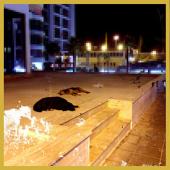