Dora Jar is an emerging new artist who's ripping up the playbook and still wildly winning!

Everything's been optimized in the 21st Century. Reading articles about the music industry is far more like something you'd see in Forbes rather than back issues of Creem Magazine. They're crammed full of marketese and corporate speak, focusing more on clickthrough rates and establishing a strong multichannel brand than anything involving creativity, heart, or soul.

This is not exactly a newsflash. Nearly every music lover or music industry professional has noticed the trend towards artists becoming more upfront and obvious. Algorithms are acting as a sort of centrifuge, separating the slick, glossy platelets from the murky red hemoglobin of more subtle music. This, also, is not a newsflash. Poptimism's been going strong for the last 20 years, even before streaming platforms became the norm, and has only accelerated in the wake of Web 2.0.

This lays the groundwork where things that sound like other things have a tendency to rise to the top. The "Listen to X if you like Britney Spears/The Beatles/The Arctic Monkeys" formula is fairly hard to shake. We're at risk at losing out on diverse, unique, eclectic and hard to pigeonhole artists.

But there's a contrary movement taking place at the same time - a tendency  to ignore boundaries and labels. These are the fans that understand that Frankie Cosmos and Mitski is punk, that are just as likely to put Bratmobile on a mixtape next to Harry Bellafonte. For indieheads that are into unique, personal, eclectic indie music of all stripes, be prepared to meet your new obsession - Dora Jar.

Dora Jar's unique mix of folk, guitar-centric indie rock, and futuristic r&b may have its roots in Jar's early childhood. Dora Jar's mother was an actress, trading her time between Broadway and Hollywood. As a result, some of Jar's earliest memories of being backstage of Titanic The Musical and listening to Stephen Sondheim as thunderstorms raged outside. Music may have arcwelded itself to Dora Jar's early imagination, as she seems more likely to try and channel the sound of clamorous thunder than to do a shot-by-shot recreation of something by Max Martin.

The end result is a wonderfully diverse, eclectic mix of sounds, eras, and genres across Dora Jar's excellent but small discography. Songs like "Scab Song," her most recent single, blends Beatles-worthy pastoralism like "Mother Nature's Son" with some woozy, phased vocals and island beats. It's like Tame Impala covering George Harrison with beats by Popcaan. The very next second you might be hearing some post-grunge, like on "Wizard," but with a sick trip-hop beat, which makes us long for a timeline when PJ Harvey collaborated with Tricky.

It's beyond thrilling to see Dora Jar receiving such well-deserved praise while still doing her own thing, She's got what you really need to succeed in music - heart, soul, creativity, work ethic, imagination, and style! We Are: The Guard can't wait to hear what she gets into next! 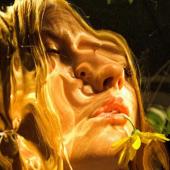