Pay attention to the wizard behind the curtain of Pop Stardom with SoCal's Ghostryder!

In some ways, Gabe Reali's story is the Hollywood Dream in reverse. He didn't move to L.A. to get discovered and become a movie star - he grew up there, well not far from there. And instead of focusing on becoming more polished as he goes, his unique, distinctive blend of indie pop/dream pop/"queer-alt” music and persona have become increasingly personal as the years have ticked on. While he’s been writing for other artists since 2017, he now shares a new project of his own.

Writing under the name Ghostryder, he's just released his first single- the irresistible "Indie Alt Boys" with its gentle strumming acoustic guitar and hypnotic boom-bap beat. "Indie Alt Boys" has a romantic, Strokes-ian glow - with Reali's voice in particular recalling Julian Casablanca's romantic croon, although a brief melodic bass break would do Nikolai Fraiture proud. "Indie Alt Boys" takes the late night East Coast romanticism and gives it a unique SoCal spin- like Edward Hopper's "Nighthawks At The Cafe" if they dropped the trench coats in favor of tank tops and corduroy pants.

It's a little incredible that such an infectious, indie pop gem could be someone's first single. Consider the soaring, falsetto chorus for a case in point, which could sound just as at home in an early Coldplay record. Personally, I've not heard such a promising dose of Pop Experimentalism since OK Go first started releasing their singles, all those years ago. Even better, these finely-tuned pop instincts are used to tell a queer love story, as Reali sweetly sings his adoration of all the indie alt boys out there.

The feeling is definitely mutual, judging from his TikTok page. With the release of "Indie Alt Boys," Reali asked his friends and fans to dress up as the titular protagonist. Much fabulousness ensued, as legions of cuties showed off their best indie alt looks, with Reali commenting on and reacting to his favorites. It's a cute, sweet moment that suggests Reali has a real community around him and his music - the polar opposite of the toxic Hollywood parasocial relationships.

We Are: The Guard suspect there are big, big things to come from Ghostryder, and we can't wait to see it. We caught up with Reali to learn about him and his new Ghostryder project.

WE ARE: THE GUARD: Hey Ghostryder! Thanks so much for taking the time to chat with us. Congrats on the release of "Indie Alt Boys!" How does it feel to have released the first single off of this project?

GHOSTRYDER: It feels amazing! Kinda hard to believe because I've been working on this song (as well as the project) for about a year now so I'm so happy it's out in the world.

WE ARE: THE GUARD: What (or who)  inspired "Indie Alt Boys?"

GHOSTRYDER: As a songwriter I'm around a lot of Indie Alt Boys, but this song was inspired by 1 in particular that the vibes were just so spot on, the song literally wrote itself.

GHOST: Early last year I came up with the chorus acapella in my room! It was like midnight and I made a rough demo on my computer that was a totally different vibe. The song started more synth pop - the hook had a similar feel to now, but the verses were totally different. I took the song to friend/collaborator Lixa and she put her magic sauce on it and the song came together over a couple of sessions. I re-wrote the verses like 4 times, which is pretty rare for me. I'm usually decisive on lyrics, especially after a rewrite or two, but something about this song I wasn't satisfied until it was perfect in my eyes.

WATG: You successfully promoted this single on TikTok. Any advice for emerging artists trying to reach new audiences on the platform?

GHOST: Just go for it and find your people! I wish I got on sooner because what you heard is true, TikTok is the best free marketing there is! I started this project from scratch so the fact I was able to get around 1k pre-saves for my first song is pretty crazy. The algorithms really know what they're doing, so if you're posting content you love, you can't go wrong.

WATG: Who are some of your all time biggest musical influences and have they changed/evolved since you first started making music?

GHOST: As a songwriter, Mariah Carey. Although the music I make is obviously a different vibe, growing up listening to her music I learned so much about lyrics and melodies indirectly.

WATG: Did you always know you wanted to be a musician? What was the moment you decided that you were going to pursue music for a living?

GHOST: The fun answer is, always! My mom is a vocal coach so I was always raised around music and started performing on stage around 3 years old. And in high school I was writing songs over YouTube instrumentals, but to be honest I never really wrapped by head around the logistics of pursuing it as a career until later. So the actually answer is probably around 2018 when I started songwriting as a job.

WATG: Being an independent artist can be really tough sometimes, so what keeps you going on days when it feels extra hard?

GHOST: Well, I feel like I just started so no down days yet!

WATG: What's on the horizon for Ghostryder?

GHOST: Putting out a couple more singles and then the EP! I've started the second EP so I'm hoping to finish that one as well by the end of Summer. In a perfect world I'd be able to put out 2 EP's this year and tour early next year since I'd say that's my favorite part of all of this!

WATG: To end with a fun one, if you could invite any 3 people - dead or alive - to a dinner party, who would you pick? 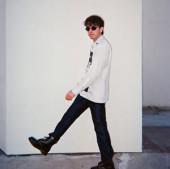