Queer icon Gia Woods had every reason to be anxious when her debut single "Only a Girl" hit the Internet in January of 2015. Not only was it her first time making music available to the general public, it was also her coming-out moment. To her friends. To her family. Even to her manager. Nevertheless, there was an air of cool unapologeticness about Gia on "Only a Girl." Having grown up in a conservative Persian household, the song marked a turning point in her life, allowing her to take control of her destiny. This commitment to living her truth has only grown stronger since then, with Gia now helping others to do the same through her boldly empowering breed of futurist-pop.

Born in Los Angeles, Gia Woods first became interested in music at a young age, playing violin in her elementary school orchestra. She later started teaching herself piano and guitar at home, with No Doubt and Green Day serving as two of her earliest guides. As she grew older, Gia began singing in the school choir, with the group regularly performing covers at local open mic nights. It was during one of these performances Gia met her manager and was urged to pursue music full-time, releasing her first single "Only a Girl" in January 2015. A fearless disclosure of her sexuality, "Only a Girl" was an immediate viral smash hit, clocking up over 11.4 million views on YouTube.

GIA WOODS - ONLY A GIRL

Over the last six years, Gia Woods has grown and evolved into an artist focused on expressing herself in everything she does. It's the sense of duality, however, that makes Gia the unique artist she is today. While proud and unapologetic, her Charli XCX-aligned hyperreal pop music builds upon a fragile heartbeat. This has been evident throughout her recording career, from 2020's CUT SEASON, right down to her most recent single "Oh My God." Written about the grip of a toxic relationship ("Oh my God, nail my heart up to the cross/I'm a wreck but I'll never leave," sings Gia), "Oh My God" is a vulnerable confessional that nonetheless slaps harder than your average EDM banger.

Gia Woods continues to courageously assert herself this month with the release of LGBTQ+ anthem "Next Girlfriend." Written alongside jesse saint john, it's another darkly sexy, sparkling cut from the forthcoming Heartbreak County, a collection of songs inspired by Gia's time spent living and loving in Los Angeles. An ode to dreams, desires, and the search for connection and authenticity in a disconnected and inauthentic city, the EP does, in many respects, feel like the culmination of Gia's mission statement. As life gradually returns to normal after lockdown, then, what better way to begin our voyage to liberation than to the sound of Gia's post-modern pop? We'll see you on the dance floor. 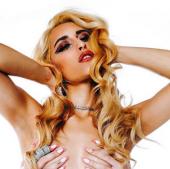