FEATURED FIND: INTRODUCING GRACE VICTORIA, THE RESISTANCE SINGER-SONGWRITER THE WORLD HAS BEEN WAITING FOR

Grace Victoria isn't afraid to call people out in her music. Consider "Black Looks Better on Me," which sees the Virginia artist cutting straight to the point with her biting, incisive poetry: "You'll dry out like a prune with all that sun/You don't gotta change 'cause you've already won/You say you like to tan because it's fun/But half the time you burn yourself, how is that fun?" It's just one of many smackdowns in this song about blackfishing – a very real, very disturbing phenomenon that sees white people using tanning, makeup, and even cosmetic surgery to appear or present themselves as Black. Examining the rage that comes with watching white influencers steal, commodify, and appropriate Black culture without any of the negative consequences of Blackness – while doubling up as an empowerment anthem for Black people to love their skin – it's a penetrating opus that couldn't make for a more perfect introduction to today's Featured Find.

Hailing from Virginia, but currently based in New York City, Grace Victoria D'Haiti is the resistance singer-songwriter the world has been desperately waiting for. Born into a family of creatives – her mother is a music educator, and her siblings play a multitude of instruments – D'Haiti has been writing songs since she was a mere four years old. But while writing comes so very naturally to D'Haiti, it wasn't until recently the Barnard College political science student tapped into the unharnessed power of her singing voice, with Grace Victoria sharing her debut single – a deeply soft, deeply tender acoustic ode to living and loving in a city called "Subway Car" – in January 2020.

As Grace Victoria's career has flourished on TikTok and beyond, so too have her songs, both in terms of their arrangements and their astute political messagings. Take: "Down in Virginia." Clocking up almost half a million streams on Spotify, it's a jazzy, bossa-nova-tinged lilt that focuses on D'Haiti's experience of being a Black woman in the South, as well as the pervasive discrimination that exists far beyond the stretches of her home state. "When I was older I took a trip to the North/You'll never guess what I found/The liberals are under the impression that racism is/No longer around," sings Grace in one particularly impactful verse. Written around the time George Floyd was brutally murdered at the hands of white police officer Derek Chauvin, it's a potent examination of the racism and aggression faced by Black people on a daily basis, and the sinister extent to which the white liberal left is complicit in such behaviors.

GRACE VICTORIA - DOWN IN VIRGINIA

Considering the fact we live in a society in which Black people, and Black women specifically, are constantly oppressed and discriminated against merely for existing, the need for an outspoken artist like Grace Victoria is more urgent than ever. This is music that agitates, educates, and empowers all of the right people. This is also music that, quite simply, sounds gorgeous. Politics aside, it's clear D'Haiti is inexplicably talented at her craft, with a voice of an angel and an ear for melodies that drift like the scent of coffee on a Sunday morning. With a brand new song, the lush "Let Me Tell You," out now, scroll down to read We Are: The Guard's interview with Grace Victoria below.

GRACE VICTORIA - LET ME TELL YOU

WE ARE: THE GUARD: Hey Grace Victoria! Thanks so much for chatting with us. As 2021 enters full swing, what's on the horizon for this year?

GRACE VICTORIA: I have my first full-length album dropping in December! So excited for all of these songs to be in the ether.

WE ARE: THE GUARD: We've been loving your new single, "Let Me Tell You." I actually heard it on TikTok and pre-saved immediately! Can you tell us about the creative process of writing and recording it?

GRACE VICTORIA: I loved every moment I spent refining this song. It started out as three chords on the piano, and has since become so much more. The trap section is probably my favorite part :) I spent about a week in the studio self-producing this piece, and I went through dozens of concepts before I settled on the latin-pop-reggae feel that the song currently embodies. The vocals were the hardest part because the song sits higher up in my register than I am used to singing. But I felt that keeping the key higher would communicate the message better than lowering it/chilling it down.

GV: I was born into a musical context- my mom is a concert pianist and music educator. Everyone in my immediate family plays an instrument or 2.

WATG:  Is it what you always thought you'd do?

GV: Yes! No... Kind of? I always dreamed that I would be doing this, but I didn't start believing that this was what I HAD to do until I got to New York. Being in the city lit a creative fire inside of me. I couldn't be there and not write, sing, or perform. After a while, it became a necessity rather than a dream…

WATG: Who inspires you in music?

GV: I was inspired to record my first song by my friends Maude Latour and Uwade. They both go to my school and are incredible independent artists. Uwade's song "Nostalgia" was probably the most impactful to me. I knew after listening to that that I wanted to make my own music.

GV: I am most inspired by my family. Everyone works so hard and has such incredible discipline in our household. I look at my mom (pianist) or brother (trumpeter) and immediately feel motivated to perfect my craft.

WATG: Is there anything you know now that you wish you knew a year ago?

GV: I wish I knew that ~there is no hurry to gain recognition~. Recognition comes with time and consistency, and it isn't a necessary part of the artistic process. All one needs to create in this world is a good idea and an open heart. Everything else is secondary.

“Let Me Tell You” is out now on all streaming platforms. 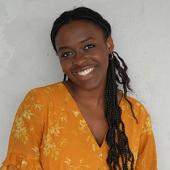