FEATURED FIND: JACKSON CRAIG IS A MASTER AT VERBALIZING THE FEELINGS YOU CAN’T ON NEW SINGLE “DISGUISE”

Feeling a wave of various emotions at once can be frustrating. Lucky for us, New York via Philadelphia singer-songwriter Jackson Craig turned the lemons of overwhelming emotion into quite the lemonade of a song.

There are notable pros and cons that come with being an empath. A pro: empaths tend to be compassionate, kind and good listeners. A con: empaths feel a lot of things, all at once, and intensely so. Although this can be incredibly frustrating, a silver lining is that music can be felt intensely. As a deep feeler of emotions, I find Craig’s new single “Disguise” to be a masterful congregation of sharp lyricism, jazzy instrumental arrangements and funky rhythms. Angelic vocals from New York based Lillimure elevate this track to even greater heights.

We were lucky enough to sit down with Jackson Craig to pick his brain on his creative process, inspirations and more.

WE ARE: THE GUARD: Hey Jackson! Thanks so much for taking the time to chat with us. We're big fans of your music, especially your track "Say To Me". Can you tell us about the process of writing and recording it?

JACKSON CRAIG: I started working on Say to Me right before quarantine first began, and over that time it became my little escape from reality. I've always had a thing for the happy cheesy music of the 70s like The Carpenters or later with Hall and Oates, and I wanted to make a song that could just put a smile on someone's face. I'm always a bit torn between music that makes a statement and music that just makes you feel good, and I think artists like I mentioned prove the value of casual, joyful music in dark times. I recorded the whole song at my home setup in Philadelphia and had friends send their own parts for keys and drums. It was really a lesson in virtual collaboration, and I think it gave us all something to enjoy in a pretty difficult time.

JC: Well the world looks a lot different, but I'm still usually just making songs in my bedroom – and I hope that never changes. But since 2017, the biggest difference is that I now live in New York City and I get to go to school everyday in a recording studio. My sense of the world has definitely grown in this place and that has had a pretty profound impact on my songwriting and lyricism. I've also worked really hard to become fully self sufficient in the recording/creative process, meaning I now mix, master and play every instrument in most of my songs! On the other hand, my circle of collaborators has expanded tenfold and I'm really lucky to go to school and create with some of the most talented people I've ever met.

WATG: "Disguise", your new single, is wonderful. Where did the inspiration for this track come from?

JC: Thank you! I wrote this song about those sleepy summer mornings, when the sun peaks in and you feel like you could lay there forever as long as you're next to the person you love. My good friend Lilli and I wanted to capture that strange mix of feelings when you're at your happiest, knowing that the moment can't last forever. I knew I wanted there to be two sides to this story, and Lilli has this effortless sweet voice that fit perfectly in the atmosphere. To me, that warm morning light sounds like saxophones on the street corner, so we added a small horn section for the quintessential lazy summer vibe.

JC: For 2021 I have more singles on the way! I'm also easing back into the live music scene as New York opens up and hoping to start collaborating with many more artists. In the spring I'm actually moving to Berlin for a few months where I'm hoping to have my artistic world absolutely rocked. So it's an exciting time!

JC: I get a lot of inspiration from musicians of course, but I also take a lot of inspo from writers, filmmakers and visual artists. At the moment I've been really digging The Japanese House and this band Parcels. I've been watching a lot of old movies and was floored by this guy Alejandro Jodorowsky. I've also been very into old cartoons and went down a strange rabbit hole of R. Crumb and Ralph Bakshi.

JC: "Life is very short, and there's no time for fussing and fighting, my friends" - My good friend John ... (Lennon)

JC: Crumbling - Mid Air Thief, The Ooz - King Krule and Hot Pink - Doja Cat (not that anyone didn't know that) 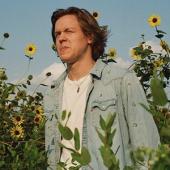