Image provided by No Other Agency

Seems like everybody keeps asking Jean Dawson what genre his music is supposed to be. Like it’s not infinitely clear from actually listening to his tunes that the singer-songwriter-producer refuses to be held down by any particular kind of categorization. His songs show their range of influence from indie to emo to pop to hip hop to chiptune to breakbeats to punk to IDM with no sign of settling into any particular one. This is the magic of 2021, bedroom production being easier than it’s ever been before and indie record labels taking a shot on someone with a killer set of tracks. Doesn’t matter what genre they are a part of as long as they rule. And these rule.

Jean Dawson is the next big thing. At least SZA and A$AP ROCKY think so. A$AP Rocky features on Dawson’s “Triple Double” and then went ahead and brought in Dawson for production duties and backing vocals on his newest single, yet unreleased (but leaked on YouTube if you know where to look). SZA hypes Dawson up in her recent Billboard interview, saying, “I listen to a lot of stuff that's not just hip-hop and R&B. [...] I love Jean Dawson. Dawson is a dude. Go look at his music video, it has like a s--t ton of views. It's on YouTube. He's Black, but it's also like some punk s--t. It's tight -- it's super tight” (Billboard 2/17/21).  Yeah yeah, we agree SZA.  Thanks for turning the world on before we could.

Here’s the video in question: Jean Dawson’s “Power Freaks” has racked up over a million plays, but as the top comment says, “[it] deserves billions.” This track captures the emo-soul quadrant of Dawson’s sound with an underlying beauty of minimalist production ultimately turning into some rollicking pop-punk that has me headbanging and pogoing in my desk chair.  The song is a journey through genres, settling in the bridge with all of its sounds coming together and forming something unlike anything you’ve heard out there so far. No wonder SZA counts herself a fan. For more of this sound check “Starface*,” which is one of our favorites of Dawsons’ more pop-punk-centric tracks.

This one is experimental to the hilt. Here, we see Dawson delving into hip-hop with glitched out bass production that channels Gesaffelstein more than Blink-182.  “06 Burst” also comes on 2020’s Pixel Bath right alongside “Power Freaks,” even though they couldn’t be more different from each other. Jean Dawson raps here as opposed to singing, throwing out a couple of vicious verses before the song delves into a full techno jam. The entire Pixel Bath LP is full of tracks that bend minds and split genres. Might as well give the entire thing a play, because it has us asking if there’s anything Dawson can’t do? At this point, we’re not so sure.

If you want to learn a bit more about the man behind the music, may we suggest “BURNOUT,” Dawson’s autobiographical video self-portrait released today. This seven-and-a-half-minute documentary is chock full of strange and surreal sci fi VFX and certainly helps listeners develop a more personal connection to his artistic vision if for (whatever crazy reason, come on--) you didn’t connect to his music. Dawson is a visionary, and that’s made abundantly clear in this self-directed piece about his history, style, process, and sound.  Rare to see an artist put themselves out there in such a vulnerable display this early in their career.  Dawson really wears his heart on his sleeve and we can’t wait to see what else that heart is going to contain in what we’re certain will be a long career. 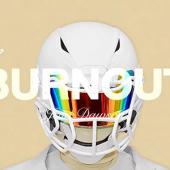