“Triple threat” is a compliment thrown around an awful lot by music bloggers, but it couldn’t be more apt when applied to KO Aka Koala – the stage name of Los Angeles-based baddie Ko Lee. A DJ, visual artist, and pop superstarlet in the making, this future-trap upstart genuinely ticks all of the boxes of a digital-age Renaissance woman. Indeed, I’m not sure I’ve ever written on a new artist quite so fully formed on every front as today’s Featured Find. But when you can quite literally do it all – from fashion styling, to optics, to production and songwriting – it’s really no surprise that KO Aka Koala is the whole package and then some.

Perhaps the most fascinating part of KO Aka Koala’s story is the fact that, despite being so naturally, inherently creative, she actually comes from a background where artistic pursuits were nowhere near the top of the agenda. Born in Florida to two scientist parents – her dad is a chemist, and her mother researches cures for infectious diseases such as kidney cancer and AIDS – KO Aka Koala reveals in an interview with HYPEBAE that the majority of her creative interests arose from self-exploration: “I grew up in an environment where no one really listened to music, so I had to discover it on my own and find artists that inspired me. Enjoying fashion and visual expression was pretty discouraged as well because it was deemed superficial and shallow. I think that pushed me to like things that I wasn’t supposed to.”

It was this rebellious streak that led KO Aka Koala to seek out a whole new world of her own creation, starting in New York, where she interned for fashion stylists and assisted on a variety of photoshoots. Never one to stay in the same place for too long, however, Ko Lee eventually upped sticks and relocated to Los Angeles in 2018 to pursue a career as an underground DJ. Bookings from the likes of Charli XCX and Troye Sivan soon followed, but KO Aka Koala still wasn’t satisfied, with the Florida transplant eventually turning her attention to original music at the beginning of quarantine in April 2020 with the unveiling of her debut single “Sadderday.”

While making a career pivot in the middle of a global pandemic and crippling recession may be a risky move, KO Aka Koala has never been one to live by the rules. And We Are: The Guard couldn’t be more thankful for it. Cybernetic, futuristic, but shot through with a deep sense of emotion and heart, Ko Lee couldn’t serve as a more perfect accompaniment to days spent living and loving through whatever technology we have to hand. Inspired by everything from hip-hop swag, to nu-metal crunch, to kawaii-pop cuteness, KO Aka Koala’s music feels fit to score a rain-dappled anime metropolis as much as it does a Hajime Sorayama exhibit. This vibe follows through into her videos and social media aesthetics, too, which often resemble high-fashion double-page spreads with a superrealism twist.

In these times of dilettantism and half-assed artistry, it’s refreshing to come across a creative like KO Aka Koala who’s quite frankly killing it in every area she chooses to put her mind to. And with only three singles to her name, Ko Lee is clearly only scratching at the surface of her vast imagination. While we wait in anticipation to see, hear, and experience what’s coming next from this pop visionary, then, check out We Are: The Guard’s interview with KO Aka Koala after the jump.

WE ARE: THE GUARD: Hey there! Thanks so much for chatting with us. As 2021 enters full swing, what's on the horizon for this year in the world of KO Aka Koala?

KO AKA KOALA: Making more music, collaborating with artists, and putting out more songs and videos. Just doing more of everything that I love. 2020 kind of taught us that we can't really know what's in the future. I would really like to do live shows soon, though.

WE ARE: THE GUARD: We love your song "go die!" Can you tell us about the creative process of writing and recording that one?

KO AKA KOALA: During quarantine, I started playing the guitar a lot. "go die!" was the first song that I've released that I produced myself. I recorded and produced it all in my room, which is weird for me because before being stuck indoors, I never really worked on music at home.

WATG: Can you tell us about how you got started in music?

KO: I guess it started by playing the piano since I was like 6 or 7. I also sometimes DJ and that got me to appreciate and listen to a lot of different styles of music.

WATG: You create a lot of really impressive graphics, videos, styling, and other things on the visual side too! Can you tell us about how you got started in doing that?

KO: Usually when I get burnt out from working on music, I'll switch it up and work on visuals. I don't think we should limit ourselves. I get really depressed when I'm not making anything, so I always try to work on something.

“Go die!” is available on all streaming platforms. 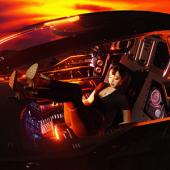