LA's KONG. delivers an indie outlaw folk take on Billie Eilish's "Bad Guy" for We Are: The Guard.

Sonically, you really have to dig to find the darkness in Billie Eilish's music. As far as aesthetics go, Eilish's as macabre as they come - seance eyes and slimepunk hair and all black everything. Even when she's wearing neon-bright Takashi Murakami floralwear or her more recent Malibu Stacy blonde looks, there's something just a little bit disturbing and disturbed about Billie Eilish.

Musically, though? Billie Eilish's music isn't that dissimilar from other forms of Pop Music - from Club Pop to Bubblegum Bass to Pop Trap and all points between. You might need to pull up the lyric sheet to notice the malevolence. Eilish's vocals are smooth and jazzy over chic house beats and a bouncy synth line. Until the beat drops beneath seductive alien vocals, "Bad Guy" is as much Yaeji or Halsey as moody 90s electro.

Rising LA singer/songwriter, KONG., draws out the spooky, self-loathing notes in a new cover of "Bad Guy," making the implicit explicit. Moody, angsty versions of poppy-sounding songs are nothing new (looking at you, Gary Jules!) KONG. transforming "Bad Guy" into a straight-up outlaw country blues rocker, while excellent, might not be that noteworthy. What is most impressive about KONG.'s "Bad Guy" is that his charcoal-and-whiskey soaked blues rocker still maintains the feeling of the original. Blues riffs uncoil over streamlined 4/4 club beats, like a barbed wire fence absorbing a fleet of Airstream trailers.

The end result is something like if Puscifer were to jam with The Black Keys as produced by James Murphy (which we'd actually like to hear), and another win for KONG., who once again shows us we simply never know what to expect from this eclectic new star... 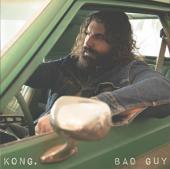 WE ARE: THE GUARD LATEST RELEASES