Lilyisthatyou offers a powerful, bold take on sex positivity and women's empowerment as well as a way forward for underground pop music.

The Western World has a fraught, complicated relationship with sex and women's bodies, especially in America. On one hand, we are obsessed with sex and beautiful people, using both to hock everything from hot dogs to sports cars to Disney vacations to public events. Sex Sells, as the old saying goes. And money makes the world go 'round, especially during these uncertain, unstable times.

A huge percentage of the time, "beautiful people" is shorthand for young, conventionally attractive white women which is where the problems start to leech in. This creates a hierarchy of beauty standards which does harm to basically everybody. And yet, for all of our worship of young women's bodies, it seems that real, genuine acceptance is still far out of reach. To illustrate the point, advertisers will use pictures of women in their underwear to sell Nascar tickets but an accidental exposed nipple is still enough to at least put the brakes on a woman's career, if not derailing utterly.

This duality creates untenable stresses on women celebrities, a psychic dissonance in American pop culture where they're expected to be both innocent, virginal, and pure as the driven snow and sexy, sexual beings (for male consumers, naturally.) You can see it explicitly in the figure of Madonna, a fitting symbol of the Madonna/Whore complex in her white wedding dress in the "Like A Virgin" video.

Madonna's a fitting touchstone when mentioning Lilyisthatyou, who's doing something similar for women's empowerment and agency that Ms. Ciccone did back in the '80s. Here, we have a young woman speaking candidly and clearly about her own sexuality with a DGAF attitude.

Toronto-based Lily Davies may be the most zeitgeist-y new artist We Are: The Guard have seen in a hot minute. Her meteoric success with only one single so far is textbook music biz fairytale in the age of social media. The role of TikTok in her rise to notoriety is also becoming increasingly common for musicians hoping to break through. In the age of TikTok, a musician can truly become world famous with only a single song to their name.

Not only does Lilyisthatyou have her finger on Pop Music's pulse, she's got a strong, clear vision of where Pop-influenced music needs to go. Her lead single, "FMRN", is short for "f*ck me right now," and has lyrics that might even make Madonna blush, in its candid, close-up view of women's sexuality and desire. "You can f*ck me on the ground/You can shut my mouth if I get too loud." If Lilyisthatyou is the new Madonna, other sexually-explicit artists like Ariana Grande would be Tiffany or Debbie Gibson in comparison. The sometimes ostentatious lyrics don't match up with an often almost cartoonish innocence that ends up being even more inappropriate somehow.

♬ FMRN use this and change my life - LILY

Instead of playing that coy game, Lily Davies is just coming right out and owning it. This brazen boldness isn't restricted to the lyrics, either. Rather than the squeaky clean, hyper-sterile Pop production favoured by the upper echelons of the Pop glitterati, Lilyisthatyou favours a more low-down, funky, grimy sonic vision, recalling instead powerful 90s women rappers like Missy Elliott or harder contemporaries like M.I.A. or the British rapper Lady Sovereign, whose Cockney-infused slang would strip the chrome off of a trailer hitch.

Lilyisthatyou's appeal isn't just restricted to her sexuality, either. By owning her sexuality and displaying it in all its raw, nude glory, she casts herself as a whole, complete being. Yes, you could imagine Lilyisthatyou having toe-curlingy good sex with her producer boyfriend Caleb Jacob. You could also imagine her making a stir fry; or bashing her head against an upright piano and she labors over a new chord sequence. Or walking around the black at 12:30 am, humming to herself beneath the stars. 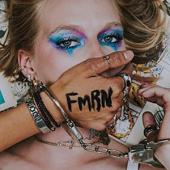