FEATURED FIND: IS LIZZY MCALPINE THE FUTURE OF POPULAR MUSIC?

If you’ve been keeping up with what’s new in music and who’s who of emerging artists, you’ve probably seen or heard the name Lizzy McAlpine somewhere. She began her career posting singles on Soundcloud, and eventually posted an EP in 2016 (available exclusively on Soundcloud) called nice!. Two years later, she released an album on Spotify and other streaming services titled Indigo. Lizzy then began regularly posting her original songs on Instagram around 2019. It was then that she won Pick Up Music’s Emerging Artist Fund competition, a popular Instagram account showcasing musicians on their page. The song that put her in that great starting position in the industry was “Lady In Blue.” After that, her online following continued to grow and hasn’t stopped since! She also had a song go super viral on Tik Tok in 2020 which introduced new fans to her music and taking advantage of the internet ‘buzz’ surrounding her music, Lizzy began releasing singles - including her most streamed to date, “Pancakes for Dinner” - that would eventually be a part of her new album titled Give Me A Minute.

“Pancakes for Dinner” is a beautifully written song about unrequited love and how when you have feelings for someone, you just want to do the simple stuff with them. McAlpine explains in the chorus - “I wanna eat pancakes for dinner, I wanna get stuck in your head, I wanna watch a T.V show together and when we’re under the weather we can watch it in bed…” and so forth. It’s about wanting to tell this person how you feel so bad but also being scared of what they might say and the possibility of them not feeling the same way. To this date, “Pancakes for Dinner” is Lizzy’s most streamed song and has garnered over 20 million streams on Spotify! Lizzy’s talent for writing interesting melodies and thoughtful lyrics has not gone unnoticed by other industry professionals either. If you look at the comments under her videos where she’s sharing an original song on her Instagram or Tik Tok, you’ll see the likes of Darren Criss, Lennon Stella, Bruno Major, and so many other well-known musicians sharing their praise towards McAlpine. The album Give Me a Minute was released in 2020 and features other songs that have become Lizzy’s signature ones such as “Apple Pie,” “To The Mountains,” and “Over the Ocean Call”. Give Me a Minute is a poignantly vulnerable observation on life, heartbreak, and young love.

In 2022, Lizzy has not taken a break. She’s currently touring North America with British artist Dodie and has recently announced that she has a new album coming out this year! five seconds flat, and a special short film to accompany it, will be released on April 8th. The album will feature collaborations with pop sensations FINNEAS and Jacob Collier. Lizzy has so far released four singles in anticipation of the new album that you can listen to now on all major streaming services. She’s also made her national television debut, performing on Jimmy Kimmel and The Ellen Show this past year. It’s safe to say that the future is looking very bright for Lizzy McAlpine thanks to not only her talent, but also the relentless hard work that she’s put in to make her career a fruitful one.

LIZZY MCALPINE - ALL MY GHOSTS 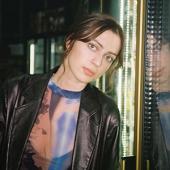