FEATURED FIND: NASHVILLE BASED LOWEN IS AT THE FOREFRONT OF INDIE POP AND ROCK ON NEW EP “LULLABY”

Emily Kopp, better known by her stage name, Lowen, makes music unique to the indie-pop and rock space. It isn’t just in her production, though - her voice is saturated with the conviction and soul of someone who has lived a full, authentic and interesting life. That’s because she has.

Kopp grew up in Sunrise, Florida and attended a Hebrew day school before moving to Orlando once she graduated high school. In Orlando, Kopp became a School of Rock teacher while simultaneously furthering her career as a singer-songwriter. She then ended things with her high school sweetheart, fell in love with a new woman and traveled the world with her for a full year. Upon arriving back from their travels, Lowen and her partner settled in Nashville. Thus, Lowen was born.

Her first single under Lowen, “Morning, Mourning” is a soulful, heart-wrenching track about the tumultuous experience of ending things with someone while simultaneously falling in love with someone new. Lowen’s lyrics shine for most of the song, whose arrangement features sparse guitar, bass, keys and drums. She insists that she is “Swimming in the new beginning”, before confessing that she is, “Drowning in the tears of the one before you”. Towards the end of the song, the track erupts with booming electric guitar and emotional yet powerful vocals. Lowen’s emotional distress is palpable, and makes it one of the most impressive introductory singles I have ever heard.

“Just Let Me Fucking Love You” was the first Lowen song that I came across, thanks to my Spotify Discover Weekly. I was initially captivated by the tone of Lowen’s voice and lyricism. “Just Fucking Let Me Love You” displays the struggles that come from being with someone who doesn’t love themselves. Lowen reassures her partner that she loves her deeply, before admitting how hard it is to love someone who struggles to accept love. She sings, “I’m begging for a breakthrough / Just fucking let me love you”. At the end of the song, Lowen’s frustration is at an all time high as she belts, “I love you / I want you to love you / As much as I love you” over full drums and electric guitar. The track turns into something of an anthem, especially for people giving love to those who can’t accept any.

A deviation in subject matter from her previous work, “Boundaries” is an important track about self care in the form of protecting yourself from the things that bring you down. Lowen realizes that, as a child, she allowed herself to be shaped by the fear of standing out among her family and peers. Confronting this realization as an adult, Lowen is now learning to celebrate what makes her unique. “I’m speaking up, I’m speaking up / I’m Growing”, sings Lowen. “The truth has been hushed, and bottled up / I exploded”.

Lullaby, the new EP from Lowen, was released on September 17 via Move Yourself Creative and is available to stream wherever you listen to music. 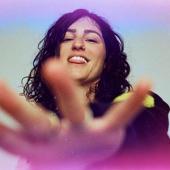