Featuring ear-catching cadences, a sweet guitar solo and top-tier lyricism, “Boggle” proves that Mega Mango is a force to be reckoned with.

MEGA MANGO - YOU SPENT ALL YOUR LOVE

Mega Mango’s debut single “You Spent All Your Love” is one of the strongest artist debuts in the past five years. A song loaded with powerhouse vocals and roaring guitar, "You Spent All Your Love" is an anthem about loving someone through thick and thin. Clare’s strong vocals open up the song, accompanied only by acoustic guitar. Like the calm before the storm, you can tell that this track is about to turn into something big by the end of the first verse. “I wanna know where you go / When you tell me that you feel alone”, Clare wails. “I wanna know you / The way you want me to”.

“Boggle” marks Mega Mango’s first release in two years and has made the wait completely worth it. In "Boggle," Mega Mango juxtapose dreamy instrumental motifs with fast paced vocals to create an absolute monster of a track. Towards the end of the song, Clare explodes on guitar, playing what I consider to be one of the top guitar solos from this year.

We had the privilege of speaking with Mega Mango about the inspiration for their new track “Boggle”, what is on the horizon and more.

WE ARE: THE GUARD: Hey Mega Mango! Thanks so much for taking the time to chat with us. We're big fans of your music, especially your new track "Boggle". Can you tell us about the process of writing and recording it?

MEGA MANGO: Hi! This one actually took the longest out of any other track we've put out. The writing process started about a month after our last release, "Hit the Dirt." The first time we sat down to record, we knew that no matter how long it took, it would be our next release whenever we were ready for it. A new school year started, our lives all changed a little, and then the pandemic hit and "Boggle" ended up floating around in the ether for quite a bit longer than we would have liked. We think, though, in the long run, that waiting was the right move. The time away gave us exactly what we needed to come back hungry. The progress we've made as artists and humans since the last time you saw any of us really has paved the way for a new era of creation for us and we cannot wait for you all to see the rest of what we have in store.

WATG: You first started releasing music in 2018. In what ways have you grown since then?

MM: One of the biggest things that has changed since our formation as a band is our motivation to collaborate and exist in spaces with other passionate, like-minded artists. The pandemic split us all apart from each other, and now that we're coming back out of it, it's clearer than ever that it is such an absolute necessity to build a community of people who are all working towards a common goal, and in our case, we just really want to make and appreciate good music and art.

WATG:  "Boggle", your new song, is amazing. Where did the inspiration for this track come from?

MM (Clare): My girlfriend goes to school at Pace in NYC so I went to visit her there a couple years ago. We went to go for a walk and ended up at the pier, which was usually pretty quiet, but there was a concert there that night, so there were a bunch of people sitting around outside listening to the music. We stayed to look out at the twinkly lights on the Brooklyn Bridge and city skyline and I fell asleep in my girlfriend's lap. I told myself on the walk home I was gonna write a song about it.

MM: We've got a few new tracks on the back burner waiting for their moment. Definitely keep an eye out in November for more from us, but we'll be around in the meantime, don't worry.

MM: This one's a loaded question! As far as artists that we look up to and try to emulate in our own sounds, it's a mixed bag for sure, but to rattle off a few big ones, there's Active Bird Community, Diners, Nothing But Thieves, Hippo Campus, Pinc Louds, and Brandi Carlile. Other than that, though, we tend to draw inspiration from each other more than anything else. At risk of being corny, we're all best friends and roommates (except Niko but he's around all the time anyway), and our relationship as people who just enjoy each other's company fully influences the sounds we're able to make. The honest truth is that in order to be able to do what we do--and do it well--there needs to be a deep mutual respect, trust, and admiration for each other as creators and as people. So in that way we've created a space for each other to feel completely comfortable to offer up and defend any idea, opinion, or criticism without judgment, and we implement this in all aspects of our relationship, including and *especially* the musical one. We just care about each other a ton and always seek a sense of mutual understanding with one another.

MM: CLARE - A phrase that's fuelled a lot of personal growth for me was something my philosophy teacher/academic dean told me in high school (and I'm paraphrasing here): it's just as selfish to hate yourself as it is to love yourself. I spent a lot of time convinced that the "selfless" thing to do was to write myself off at every opportunity, and not only did that cause a lot of damage to my self-esteem, it also accomplished nothing in terms of that "selflessness" I thought I was trying to achieve. If anything, the act of drawing negative attention to myself in that regard was even more selfish than if I were to just move through life with a legitimate awareness of my worth. So I try to be more aware of those moments now where I previously would have chosen a sort of "toxic honesty" over accepting praise, and I actively make an effort to choose the latter instead.

ALEX - A producer once told me to never get too let down or too excited about something. No matter how well things are working out, keep a clear and even head, and same goes for when things aren’t going so well. Just focus on the music.

“Boggle,” the brand new track from Mega Mango, was released via Elton Audio Records on September 28 and is available to stream wherever you listen to music. 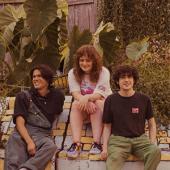