FEATURED FIND: MIKEY FERRARI IS REAL, RAW, AND RELATABLE ON “TRUTH IS”

Mikey Ferrari is that most rare of diamonds - a rising pop star that is still real, raw, and relatable.

Los Angeles is many things. It's one of the oldest cities in North America, for instance. It's a home to many different rural and working class communities. And, of course, it's the spiritual center of Pop Culture for much of the world. L.A. is the dream factory, where fantasies are spun whole-cloth from pastel sunsets over the Pacific Ocean and the stars in young hopeful's eyes.

With L.A. being so many things to so many people, it can be really hard to get a read on someone. Your barista may moonlight as a screenwriter. Your Uber driver may be a television star. On one hand, it's humbling - a reminder that celebrities are just normal people, too. On the other hand, though, it does have a tendency to cause regular people to adopt a bit of an attitude. Even normal people bill themselves as influencers, as rising stars, as far more important than they, in fact, are. The truth is buried deeper than the oil beneath Sunset Boulevard, beneath an inch-thick lacquer of suntans, social media filters, affectations, and good old fashion fronting.

Which brings us to Mikey Ferrari, a wonderfully unpretentious new indie musician who's actually willing to tell it like it is.

Mikey Ferrari's been raising some eyebrows with "Truth Is," a confessional acoustic ballad delving deep into L.A. mythmaking and the weird sense of vertigo it can bring. Armed only with an acoustic guitar and a voice like red cedar, Ferrari speaks candidly of what it's like when nearly everyone you interact with is the child of some rich, powerful producer or is, themselves, a young hotshot social media celebre. Or, they claim they are anyway…

On "Truth Is", Mikey Ferrari reminds us that you don't need flash and glitz and glamour and a 7-figure promotional budget to make compelling, catchy, relatable music. With "Truth is," Ferrari reminds us that, at its heart, a good story and a memorable melody are really the DNA of music, of any genre. And a gifted musician can make timeless music with only a couple of sticks and a good idea.

should i release this?? my dad owns the lakers… ##lakers ##folk ##viral

That's not to suggest that Mikey Ferrari's ushering in a new era of blue collar rock, that he's some all rootsy, rustic acoustic troubadour. Ferrari first started earning rave reviews earlier this year with the rapturously received Spaceboy EP, which could not be further from the earthiness of "Truth Is." Spaceboy is decidedly futuristic, shining and glistening like James Blake-style post-dubstep, with bass as thick as La Brea tar and beats as sharp and tight as a snare. The heart is still there, though, still delivered with Mikey Ferrari's iconic voice.

We caught up with the rising singer-songwriter to discuss “Truth Is” and his journey in music.

WE ARE: THE GUARD: Hey Mikey! Thanks so much for taking the time to chat with us. Congrats on the release of your new song "Truth Is!" It's so honest and inspiring. Can you tell us about the process of writing and recording it?

MIKEY FERRARI: I wrote "Truth Is" with my close friend Pink Slip about my feelings towards LA and the insecurity it brought me when I first moved here. It’s a reminder to myself that my identity is not defined by accomplishments, social status, or money, but my character as a human being. It's also by far the fastest song I’ve ever written. We made the original demo in about an hour, came back to it a year later with our friend Inverness, and reconstructed it completely. It’s my favorite song I’ve made thus far because of how much I was able to push my voice and myself.

MIKEY FERRARI: I’ve been working on an album for about a year now… Can’t say too much about that, but there will be another single sometime very soon. Performing is by far my favorite part of being an artist and I plan on playing more shows as well.

MF: When I moved to Montana at 16, I was pretty disconnected from the world. I picked up a guitar and started writing songs pretty quickly. It felt like the most natural thing I'd ever done and I just kept going because it made me feel like myself and still does to this day.

MF: It depends where I’m at emotionally, but Elliot Smith and Pink Floyd as of recently. I enjoy the way that Elliot crafted songs with his chord structure and melancholic feel. I enjoy much of Pink Floyd’s live recordings and aspire to create an experience like that.

MF: To be honest, my family. My parents have truly taught me unconditional love because I was such a “troubled kid” growing up and they did everything they could to help me. My brother has taught me a great deal about humility and vulnerability, and my sister is actually my favorite artist. I’ve never heard someone sing like she can. I look forward to the day she releases her own music.

MF: My dad always told me to surround myself with people that are smarter/more talented than me. His advice changed the course of my career.

MF: Not exactly, but I did see Bono in the clouds once. Bizarre. He was singing a song from the album that was downloaded to our iPods without consent. Although, it may have just been what I ate that day...

"Truth Is" is out today on all streaming platforms. 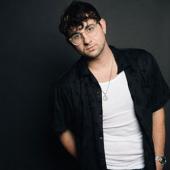