FEATURED FIND: TIME TO PUT ON YOUR MOM JEANS.

If you’re a sad, lonely piece of shit with no hope left in love, then it’s time you start listening to Mom Jeans. They might be a new find for most people but they’ve actually been around since 2014, so yeah, you’re way behind. Catch up! They sing about lost love, weed, booze, cigarettes, wearing only black t-shirts and staying in your bedroom for far too long. Relatable, right?! Yes, we’re all fucked up and Mom Jeans. has a poetic way of expressing just how fucked up we are with honesty and authenticity.

Coming out of California, they definitely aren’t your typical Californian band but rather something you’d expect from the Midwest with the likes of bands like Modern Baseball and Joyce Manor (Yes, they’re from California too but I’m talking genre here people). Their listed genres on Wikipedia include indie rock (not really), pop punk (totally), emo (100%) and Midwest emo (see, I told you so). Mom Jeans. have also been described as Twinkle Daddies and as fun as that name is, here’s a little definition in case you’re old like me: Emo-ish bands with the twinkly guitars and hoarse vocals. Basically, the music your teen heart craved. And maybe you’re like me, who for some reason just never grew out of that heartbroken “everyone hates me” sad and alone phase. It’s like I hate being happy, and I know I’m not the only one so if you’re like me, stick your hand up and keep reading.

If you’re a pretentious musician, because all musicians are (yes, I just said that), then you’ll probably hate Mom Jeans. because their simple and uncomplicated musical style won’t live up to your standards and that’s fine. Their songs have been accused of all using the exact same chord progression, but I think their latest album has switched things up a bit. We’ll get to that later! But what this band has to offer is so much more than technically accurate and complex instrumentals. Their lyrics speak volumes. So simple, yet so perfect, throwing everyday situations and objects into new perspectives and poetic one liners that you’re going to want to replay over and over because they’re just that good. Even from their band name to their album names, they make ubiquitous (big word, I know) things seem inviting and unique.

If I could change one thing about Mom Jeans. it’s that I’d want them to be more well-known so I could share my obsession with others because what’s the use in loving something if you can’t share it with the world, right?! Mom Jeans. has taught me that I’m not alone in being a weird loner creep who can’t get over their last relationship and just drones on and on and on about it for years after. Thank you, Mom Jeans. for making me feel seen as the pathetic shit bag that I am.

Not only will Mom Jeans. make you sad through their music, but they’ll get you even sadder in person with their killer live performances and current US tour. Check them out if you want to cry with a group of fellow sad sods and former emo kids while you uncontrollably move your body to their dynamic sound. EMO NEVER DIES!

Their latest album Sweet Tooth is their most sincere, raw and obsessed one yet. It’s like being wide awake through open heart surgery. I can’t decide if I would recommend it to a severely heart-broken individual, because it has the potential to throw you off the edge while also being really upbeat and something you can dance to. So, you’ll either dance or slit your wrists. Roll the dice and listen to it anyway because you don’t want to miss out on this one while it’s fresh. Then take that obsessive energy and dive deep into their catalogue because it’s all good. Even the gnarly early stuff.

Sweet Tooth is a concept album that plays with the theme of ear candy with every juicy track, from the opener “Something Sweet” all the way to my personal favorite, the closer “Teeth”, singing “’Cause you’ve got no teeth, you were just talking sweet. You were everything to me, but now you’re just cavities.”. Ouch! The band takes a step forward from their emo roots and taps into some power pop hype with this one and I got to say, I’m here for it. All in, baby!

Seriously though guys, girls, and theys, I want you to ugly cry to this album on repeat until you feel equally empty and full at the very same time. Mom Jeans. gives you music to relate to and connect with while ripping your emotions to shreds. If you don’t like Mom Jeans. then I’m judging you HARD and you definitely can’t sit with us! If you’re in the US, and you probably, are then catch them on tour this Spring because I can’t and I want you to be sad just like me because if I can’t be happy then neither can you. Now listen to Sweet Tooth below and start sobbing! 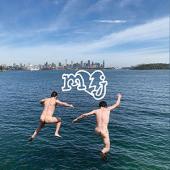