FEATURED FIND: NAïKA HAS THE “SAUCE” AND THE ENTIRE RECIPE TO AN EMERGING GENRE

Naïka has been paving her own lane in an emerging genre- World Pop. Influenced by the sounds of pop, soul, as well as her family’s African, Caribbean, and European cultures, her unique voice is supported by beats that are just as special. With a Haitian mother and French and Malagasy father, Naïka was born in Miami and moved all over the world growing up. She eventually moved to Boston to study performance at Berklee College of Music, where she honed in on her unique skill set as a songwriter and vocalist.

In 2020 Naïka released her Lost in Paradïse, Pt. 1 EP with AWAL Recordings. The EP features 5 songs that further solidify her World/Pop/R&B sound and confident, lyrical prowess. Themes center around the journey to self love, fighting insecurities, and finding yourself. Pt. 2 will focus on what happens when you arrive at that place of confidence- paradise.

She embraces her roots and pushes the envelope on what pop music can sound like and consist of. I mean, who writes a pop song in 5/4? Naïka did, and it’s an empowering and danceable jam about not giving in to those internal voices that tell us we’re not enough (the vultures). In the stunning music video accompanying “Vultures,” she personifies those pesky inner voices- guilt, doubt, jealousy, laziness, ego, and anxiety.

A few months later, she exploded on TikTok with her original spin on the hit “Don’t Rush.”  With over 12.2M views on TikTok and millions more on Twitter, this catapulted her music to new ears. To the delight of her new fans, her original music SLAPS.

After teaming up with WATG favorite TeaMarrr for a remix, “Water” appearing in a new FIFA game, and her new release “Sauce” landing in an Apple commercial, it’s clear that the rest of the world is catching the wave. Naïka is onto something HUGE and we are here for it!

“Sauce” is available now on all streaming platforms. 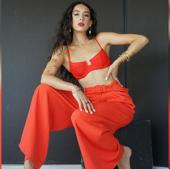