The Internet's Patrick Paige II asks us to reconsider what we expect from bass players, revealing himself to not only be a vital component of the LA collective, but a true genre- and era-defying polymath.

Let's be real - bass players often get a bad rap. They're the subject of all sorts of mean-spirited musician jokes (Q: What do you call someone who hangs out with a bunch of musicians? A: The bass player!) They're often treated like guitarists-lite. They only play one note at a time! How hard can it be?

That totally overlooks the role that a good bass player can have in a band's success. A good bass player is often the deciding factor between a good band and a great one. Look at Red Hot Chili Peppers, for example. They'd probably never get a mention were it not for Flea. Or what about the Grateful Dead? They might've been just another acid-damaged blues bar band were it not for Phil Lesh, already well-versed in modern classical music, who pushed the band into strange new galaxies.

There's been a bit of renaissance for bass players in recent years thanks to the unexpected popularity of Brainfeeder's Thundercat, hinting at a new, weird P-Funk for the 21st Century. But isn't this just George Clinton 2.0? Are we just reliving the late 70s, minus the polyester (Not that that would be the worst thing in the world)?

Patrick Paige II has been pushing the envelope even further from what we expect from bass players' solo records for the past several years, beginning with 2018's Letters of Irrelevance. When it came out, Pitchfork commented on Irrelevance as "a muted, soulful, profoundly introverted record that focuses more on loneliness and neuroses than the Southern California good life." Paige's music sounds like West Coast g-funk, but the West Coast party hides a weird, introspective, slightly isolated existence.

Paige's music is like a time traveling tour through 40 years of Los Angeles music history, from the funk and early hip-hop of the late 70s all the way through Snoop Dogg's breakout singles for Death Row Records, sometimes on the same track. Even more impressive, Patrick Paige II's music could hold its chin up next to any of these, which is something not much music of the last 30 years can say.

Patrick Paige II is ramping up for a new solo release, If I Fail Are We Still Cool, due out on May 21 on Fat Possum. It stands to be an even more fully-realized and fleshed-out affair if lead single "Whisper (Want My Luv)" is any indication.

Keep reading to see our interview with Patrick Paige II!

WE ARE: THE GUARD: Hey Patrick! Thanks so much for chatting with us. As 2021 enters full swing, what's on the horizon for this year?

PATRICK PAIGE II: My album, continuing my fitness, and hopefully some kind of performances.

WE ARE: THE GUARD:  We've been loving your new singles. Can you tell us about the creative process of recording "Whisper (Want My Luv)?"

PATRICK PAIGE II: It was very organic, all of the features are my friends. We had separate sessions, and it came together like a megazord.

WATG: The music video is awesome! What was it like filming it?

PPII: Definitely the most fun music video I've shot. Long hours the second day, but they flew by because we had so much fun. Definitely felt like a real flight.

PPII: I was born into it. My mom was a singer and used to sing to me while she was pregnant, as I was a child, and so forth.

WATG: For all the gear-heads out there: Tell us about your basses!

PPII: I play for MTD (Michael Tobias Design) Best basses I've ever played in my life. 2 six strings, 1 five string. I have 2 fenders, and one Ibanez.

PPII: Selection Radio, Jazz and a lot of anything Cardo produced. Mostly Payroll and Larry June.

WATG: You just released "Big Plays" ft. Westside McFly! How did this collaboration come to be?

PPII: I called Westside Mcfly because he had the perfect energy and charisma for the song. He came through, laid the hook, and instant magic happened.

WATG: Any advice for aspiring musicians?

If I Fail Are We Still Cool will be out on all streaming platforms on May 21st (digital), and July 30th (physical). Pre-save and pre-order it here. 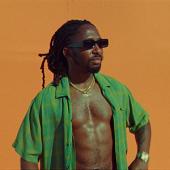