Hip-hop and horror go hand in hand. The pairing goes all the way back to at least the 80s, with pop cultural references like DJ Jazzy Jeff & The Fresh Prince's "Nightmare On My Street," which namechecks everybody's favorite wise-assed child murderer Freddy Krueger, or sampling iconic horror soundtracks like John Carpenter's 5/4 favorite, the theme song from Halloween, which has been sampled by everyone from Ice T to Wiz Khalifa.

Horror has long since been embraced by hip-hop, in every era and every genre. Classic horror tropes have worked their way into modern hip-hop videos from everyone from Nicki Minaj to Travis Scott to Childish Gambino. Sometimes it's in reference to the horrors of society. Other times the rapper's identifying with the killer. Either way, hip-hop clearly has a lot to say about the horror genre and vice versa.

In recent years, hip-hop has even stepped forward to become the most prevalent, prominent advocate of horror-adjacent themes, replacing the old guard of extreme music and culture like heavy metal and punk. Hip-hop's become the most prominent voice for outcasts as well as a vessel for all of humanity's darkest instincts. Hip-hop is the new heavy metal.

Nowhere is this more obvious than the emerging field of "emo rap," with its frequent themes of alienation, disaffection, heartbreak, and nihilism. It blends the emotive yowl of 2000s emo with teflon streetwise beats. Some of the OG emo rap gets a little too dark, though, with a body count higher than a Friday the 13th movie. Horror needs to be entertaining as well, not just wallowing in the dark side of humanity.

From the first seconds of POORSTACY's The Breakfast Club EP, it's obvious that there's a new leading light in the emo rap firmament. Gauzy, cloudy beats keep things chill and lofi enough for a study playlist while POORSTACY's filtered vocals deliver that angsty, gut-shredding yowl that makes us reach for a Pop Smoke or Juice WRLD playlist in the first place. POORSTACY seems a little more grounded, though, giving us hope that he'll last longer than six months.

With every release, POORSTACY's blend of hip-hop, metal, punk, and hardcore gets tighter and more intricate. His newest single, "Children of the Dark", would sound as at home in a mosh pit as at a club night. Impressively, POORSTACY is revitalizing emo and punk right alongside emo rap, offering some protest songs of alienation and ennui beyond the skinny jeans and side shaves.

POORSTACY - CHILDREN OF THE DARK

At this point it's becoming obvious that Internet Money can't miss. Like POORSTACY himself, the hip-hop collective is proving that hip-hop is also the new punk, taking the profits from their more mainstream successes and investing in hot new talent like POORSTACY. Long may they reign, We Are: The Guard say! Long live the new metal! 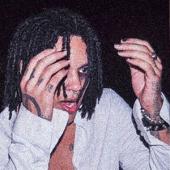