Image from The Baby Reimagined Artwork

I’m at an impasse. There are two ways that I could take this write-up. Tell you all about the Samia songs that have the most plays. “Big Wheel” or “Triptych” or “Is There Something In The Movies.” Write about how she makes some dark pop with a bit of a country twinge (or twang I guess) that rings a little of pop stars you already have an intimate relationship with. That her songs have hooks, sure, but they’re not so happy either. A songwriter for the ages if she only were to lean in on it. Or I could go the other way with this Featured Find and choose to focus on the more strange side of this New York City musician. More of a child of Devendra Barnhart than Lorde or Lana. How about the fact that her new single, and the lead song on her record are both more reminiscent of shoegaze or chillwave and the whole pop side of things takes a backseat for more psychedelic productions. Or the fact that she has released a re-imagination album of her debut record within the same calendar year. The Baby Reimagined allows artists I’ve never heard of before the opportunity to turn her tracks into their own weird and wonderful versions. Whether it be covers that ring of Xiu Xiu or remixes that ratchet up the song’s subtle strangeness. Are these the decisions of someone that wants to be exclusively known as a pop star? I don’t think so. Because of these nods found in her music, I’m going to lean a little bit harder on the spacier songs in this write up. Sure, they’ve connected with my taste a little bit more, but also I think there’s really something special in the mix of styles. If you don’t love what you hear here, go check out the songs mentioned at the top of this piece. Maybe they’re more for you. And that’s cool too.

Talk a big game though really, I’m asking for something monumental from this young artist. Essentially, can she keep her artistic integrity high and continue to write with interesting production and deep lyrics without going overboard into pop sensationalism? A tightrope that few (outside of Bjork I mean) have been able to fully nail. And yet it’s Samia’s newest single that gives me the most hope. “Show Up” is that perfect in-between. The ‘anything is possible because the last song is so good, it gives you chills and you feel good about it’ vibe.  Now let’s just have them all be like this and we’re truly destined for greatness.  No big request. Casual. “Show Up” let’s Samia’s amazing voice show it’s full range with big drums, spacey layers, and even some My Bloody Valentine style guitars churning underneath.

This is the one though. The one that perhaps all my delusions of mastery might be hinging upon. Definitely a delusion I want to live in though so please let me enjoy it in peace. Swim around this pool. The lead track off the record also the most out there? Coincidence, I think not.

But that’s not all she does. Let’s not pigeonhole the singer-songwriter before we let you get the full picture. On Field Medic’s “bundle of hyacinths,” Samia lends her angelic croon as a second vocalist to round out the singer’s lo-fi indie folk soundscape. It works, deepening the mood to something beyond what just a man and his guitar is capable of. Truth is there are numerous tracks on Samia’s 2020 debut that feel more along the lines of folk pop or even country pop than these choices of dark and brooding experimental shoegaze pop or freaky as hell folk. Samia jumps around sounds casually, between psychedelic shoegaze pop and indie folk. Huge leaps, but we’re here for it, especially since most of her Spotify plays seem to come off of “Big Wheel.” which feels just a little bit more Taylor Swifty than Field Medic’s freak folk offerings. These other three songs though? They decidedly do not. We like it both ways tbh.

Samia is on tour with Sylvan Esso this September. 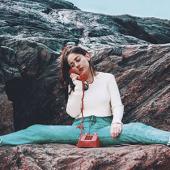