Pop culture has had a complex, sometimes even confusing, interaction with the underground in the last 10 years. On one hand, you've got the biggest artists in the world dropping mixtapes and releasing 'zines to launch an album, like they're rappers or a punk band hawking their wares out of the trunk of their car. On the other hand, you get relatively unknown musicians and producers turning out clean, crystal clear, and utterly masterful tunes from their bedrooms and home studios.

One of the most interesting developments to arise from this back and forth is hyperpop, the HD pop/electronic hybrid brought to prominence by the PC Music collective. Hyperpop worships at the altar of the late 90s and early 00s, jammed full of electronic sounds and effects like it's some sort of Gushers commercial, while pop music and culture of that era is venerated, with Britney and Paris and Avril and Lindsey acting as patron saints.

The maximalist, hedonistic early 2000s is the explicit origin of Slayyyter, the project of 24-year old St. Louis musician Catherine Slater. Slayyyter came out swinging in 2019 with her self-titled mixtape, perfectly encapsulating the hypersexualized high gloss fizzy-lifting sounds of hyperpop. Sonically, Slayyyter's cloned from the stem cells of Jessie J, Charli XCX - who Slayyyter has collaborated with on a remix - to pop music mainstays like Kylie Minogue. It's straight up club pop, but dosed with futuristic sound design and adorned with modern aesthetics and iconography - angelcore meets gangster rap.

2021 is the year that Slayyyter goes legit, as she has released her first album proper Troubled Paradise. Stereogum's review of Troubled Paradise sums up the current state of hyperpop, and the role that Slayyyter plays in. They call Troubled Paradise "normcore hyperpop" and maintain she is "dragging the sound of hyperpop back out of the uncanny valley." What is perhaps most striking about Troubled Paradise is how normal it sounds, even with its triple-x lyrics that would make Traci Lords blush and militant, edgy post-trap beats. Troubled Paradise also shows that Slayyyter is good for more than shock value, as it's chock full of actual songs alongside the memes. Tracks like "Butterflies" would work on the dancefloor alongside her heroes like Christina Aguilera or even, dare we say it, Britney Spears.

Slayyyter seems to be addicted to the lightning-fast hamster wheel cycle of modern pop. She rolled out Troubled Paradise with a mind-numbing eight singles. Last week, Slayyyter returned with yet another single - "Stupid Boy" with the Queen of Bounce herself Big Freedia. While the sounds of hyperpop are only going to keep becoming more normalized, one thing seems to be clear, Slayyyter will be one of the hands steering the vessel. 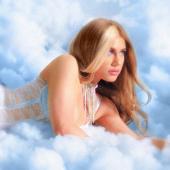