It’s uncommon for artists to make waves with a debut single - but when they do, it’s a tsunami. Enter splendi: her one song, “unoriginal” has done just that, and for all the right reasons.

My favorite aspect of Spotify is the number and quality of the platform’s editorial playlists. Whether it be “lorem,” “POLLEN,” or “my life is a movie,” curators, artists and fans alike have built worlds around these playlists. That being said, smaller indie artists tend to be inhibited by the size of their audiences and won’t find themselves on editorial playlists, no matter how great their music is. Sometimes there are exceptions. The most recent, exciting exception has been splendi’s debut single “unoriginal”. “unoriginal” found its way onto major editorial playlists and subsequently onto the radars of those who love indie pop, rock and sharp storytelling.

You would never guess that Philadelphia-based splendi is only one song deep into her career. A Temple University graduate with a degree in general education, splendi has been a musician for a while now but only recently started to pursue music. splendi has the confidence and the sound of a seasoned professional yet the discography of someone just starting out. Using TikTok to build up a following, splendi garnered a sizeable audience of people anticipating the release of unoriginal - myself included.

Reminiscing about a bad date with a far-too-audacious man, splendi turned lemons into lemonade on her debut single “unoriginal.” “unoriginal” features an addicting melody composed of fun guitar licks, upbeat drumming and a fun bassline. Accompanied by humorous, relatable lyrics (“Karma’s a dick / And you’re one too”), “unoriginal” is an indie kid’s dream Summer song.

We were lucky enough to talk with splendi about “unoriginal”, her creative process and what is on the horizon for her.

WE ARE THE GUARD: Hi splendi! Thanks so much for taking the time to chat with us. We're big fans of your new song "unoriginal." Can you tell us about the process of writing and recording it?

SPLENDI: Totally! I came up with the chord progression in my room one night, and I thought that it would be fun to make it into an indie pop diss track. It didn't take me very long to pick the person it was going to be about. I developed the entire concept for the song, and wrote the chorus and 1st verse all that night. Then I scheduled a session with my friend and producer, Nick from space. From there we added some more parts to the instrumental and he produced things while I continued to write the rest of the lyrics. Once I had all the lyrics written, we started recording in his room. The entire song was written and recorded in our bedrooms, which I really love because it made the writing process very laid back, and casual (compared to writing and renting out a studio space). Personally, I think ideas flow much better in a more natural environment like that where you don't have to be concerned with how much time you have the space for.

WATG: "unoriginal" is so well written - what inspired the lyrics of this song?

S: Thanks! It's unfortunately a true story about a terrible date that I had a while back. I met this guy at a Crumb concert and he was really charming and we shared a few mutual friends that were there. So we all went out to grab food after the concert, and then a few days later we matched on Tinder. We both thought that it was fitting to meet up, so he suggested going out for a nuggets date since we both lived directly next to the McDonalds on Broad Street in Philly. At the very end of the night, he casually dropped the fact that he had a girlfriend completely out of nowhere. So I told him I had to leave, and he walked me out of his apartment. As soon as I left he sent me a text saying, "This was fun, let's do it again sometime :)". I was completely shocked at the entire situation, and I don't know if he couldn't read the room and tell that I was bothered or if he just really had the audacity to send that text. Regardless, I wrote a song about the whole night, and he totally doesn't know that it exists. If I'm being honest, I'm a little worried that he'll hear the song and figure it out, or worse, his girlfriend will. I don't know if they're still together or what the situation is with all of that, but yeah. Each line of the song is completely true to that night and the lyrics are full of... dick jokes.

WATG: "unoriginal' is your first released song! What were the deciding factors for choosing "unoriginal" as your debut single?

S: I wanted to start getting some music out as soon as possible, and at the time, I felt like it was the strongest song I had. But since the release of "unoriginal" I've workshopped some of my other songs and I think I might like those ones even more than "unoriginal". So I'm super stoked for the next release this summer!

WATG: What has been the most rewarding part of releasing "unoriginal?"

S: I think the coolest but also scariest part of the release was putting a piece of my life out on the internet for anyone to listen to. It's a super vulnerable feeling to release music especially when it's true events and experiences from your life. I've had a few people tell me that they really resonate with the song, which is incredibly rewarding, because the only reason I'm so open and honest in my writing is to give listeners the opportunity to relate.

S: Currently I'm finishing up shooting the music video for "unoriginal!" The video stays true to my personal experience and highlights the worst things about the guy and the date through the visuals. It's a pretty deadpan and ironic music video that just felt really natural to shoot. Designing the outfits, and sets like props, wall art, and room decor was honestly really funny because the whole goal was to break down and display a stereotypical guy who listens to indie music. But I seriously like all of the same things and ended up keeping a lot of the props and wall art from the scenes and have them in my room now. So the humor in the music video is very self-aware and all for fun - no hate to any dudes who love The Smith's, 'cause I do too. The video really does paint a perfect picture of my experience and I think it brings the lyrics and the song to life even further. I also have another single dropping this summer, but I'm currently trying to decide on which will come next. It'll either be "nancy drew" which is a song about my trust issues, or "lazy bones" which I wrote during a period of time where I was feeling really low. I'm super excited to release both which is why I'm having such a hard time deciding what should come next.

S: It's definitely a common one, but my parents would always tell me growing up, "Don't sweat the small stuff, Isabella." Of course, as an over-thinker and a generally anxious person, I didn't really heed their advice until recently. Although since I have, it's been really refreshing to just let things go and acknowledge that some stuff is out of my control.

S: For me personally, I think Lonerism by Tame Impala, Bury Me at Makeout Creek by Mitski, and The Baby by Samia.

“unoriginal,” the debut single from splendi, was independently released May 20, 2022 and is available to stream wherever you listen to music. 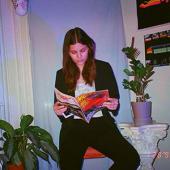