Today's Pop/indie pop scene is in a weird state of flux. Given the sheer volume of how much music is released on any given day, music needs to have a certain amount of immediacy and accessibility to really stand out and stay with you. There will always be a place for the weird, the lo-fi and experimental but a certain melodicism is needed for a song to really live inside your head.

And yet, we're decades into being barraged by Pop music and culture every which way you turn, everywhere you look and listen. Whereas bright, shiny, earworm Pop may've once been novel it almost comes across as some sort of jingle at this point. Falling in love with one of these is about as likely as having the Saran Wrap as your favorite tune.

For music to truly stand out, it needs to find that sweet spot between the personal and the poppy. Which is where Los Angeles singer/songwriter Suriel Hess comes in.

Suriel Hess' musical origin story is as unassuming and as unlikely as you could hope for. Hess was given an acoustic guitar by his dad for Christmas. When he would go and visit his dad during the summers he would practice guitar instead of trying to make friends. This led to him uploading YouTube covers and the rest, as they say, is history.

Listening to "Sick Of You," Suriel Hess' newest single, it's obvious he made the right choice.."Sick Of You" finds that sweet spot between the poppy and the personal, with his soulful romantic croon gently cresting over a sparse jazzy acoustic guitar. Hess reaches a similar height to the neo-soul of Harry Styles, one of his musical idols and icons, with an anachronistic Jazz Age romance a la M. Ward.

SURIEL HESS - “SICK OF YOU”

The overall impact is one both timely and timeless. "Sick Of You" could just as easily be from 1921 as 2021 had it not been inspired by a raging pandemic.

"Sick Of You" makes you want to listen, want to throw it on your playlist, maybe copy some of its lyrics onto your bookbag or Chuck Taylors or maybe into a love letter. It's a sound that you want in your life. We Are: The Guard hopes it helps break Suriel Hess to a wider audience. He gives us hope that personal music can still be catchy and well-written!

WE ARE: THE GUARD: Hey Suriel! Thanks so much for chatting with us. How have you been?

SURIEL HESS: Thank you for interviewing me! I've been feeling all of the emotions.. a lot of highs and lows lately but I would say excitement is the winner because of this new release!

WE ARE: THE GUARD: Congrats on the release of "Sick of You!" It's such a sweet song, and so relatable given the times. Can you tell us more about the process of writing and creating it?

SURIEL HESS: I'm happy to know that it feels so relatable. I wrote it with Peter Fenn and Jesse Fink via Zoom about 3 months into quarantine. They asked me to spill out how I was feeling and we felt like telling an honest, of-the-times love story felt the most relevant. Spending a lot of time with my girlfriend Jill during quarantine gave us the chance to really get to know all of each other's details.. this song is about not getting sick of those details.

SG: So many artists. The Paper Kites really influenced how I learned guitar (which is now the center of all of my songs). Then there's Mac Miller, Harry Styles, Donna Missal, Kito as of late, and of course J Biebs.. to name a few.

SG: Anyone who can be honest and authentic. My favorite people are the ones that push me to want to be even weirder and expressing. Grandpa Ratski was always one of those people for me.

WATG:  Do you have any hidden talents or hobbies outside of music that people might not guess?

WATG: How did you get started in music, and is it what you always thought you'd do?

SG: I thought I was going to do something in Business for a little bit.. but I've probably always known it would be music. My Dad got my older sister and I twin acoustic guitars for Christmas. When I would visit him in the Summer (he lived about 4 hours away) I would teach myself guitar from YouTube instead of making friends. That turned into posting YouTube covers, then doing live-streams, then writing originals and sharing them with 10's of thousands, and eventually 100's of thousands of fans online.

Stream “Sick of You” by Suriel Hess, out now on all streaming platforms! 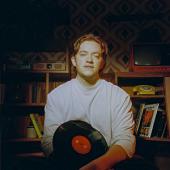