Teflon Sega is a 2D gif-based anime singer that has been making waves straight into our souls (are we part of the virtual now too?) with banging (as well as totally existentially depressing!) R&B tunes that are paired quite brilliantly alongside one hell of a strong aesthetic guiding principle. Guess that the Gorillaz had to walk first so that Teflon Sega could run. This isn’t some Hatsune Miku knock off either, whose voice is created artificially via algorithmic software (no shade, we think that’s hella cool too). No no, this is someone, somewhere, creating some of the best chill out hip hop tunes we’ve heard all year without a face or identity or anything to stand behind the music and accompanying moving images but the music and accompanying images. We’re desperate to know more while also simultaneously being completely satisfied in the mystery.

Sure, we can talk about anonymity all day, but the truth is Teflon Sega is just doing things right. The songs hit… HARD...in a beautiful and mellow kind of mood that is impossible not to bob your head along with. AND the visuals are stunning to boot. Truly beautiful animation with next level pigmentation of character in time and space. Like we’re really there with him in these scenes of a sci fi cyberpunk future state. At least for seconds at a time. What more can you ask for? Time to escape into the Matrix...

For more information on this artist (not that there is much), please make sure to check out his entry on Virtual Humans .org (wait, this is a real website?).

“1+1 2+2” is as uncertain as it is absolutely assured. The lyrics reference drug use, getting put in the friend zone and an overall sense of malaise. The message is simple, but the mood is heavy. Like the weight of the world rests on your shoulders, something that many of our listeners are likely to understand. Here, Teflon Sega raps more-so than sings over lush production and gigantic sounds from his producer Cobra. The song is catchy and truly one of the best new hip hop songs we’ve come across in a while. Please note the “wheeee” layered into the background after the first chorus hook.  It truly has us loving life. The unbridled joy of trying something and having it succeed, whether it be animation style or production flourishes is palpable here. And while the lyrics might hint towards otherwise, this song brings nothing but hope to our hearts.

TEFLON SAGA - “DEMONS ON MY SIDE OF THE BED”

The Weeknd comparisons are comparable so let me get them out of the way here and get on with it: this song sounds like The Weekend. But if The Weeknd had his heart ripped out and stomped on the ground and actually admitted to it instead of moving onto the next woman and pretending like everything is just fine. The accompanying image makes the demons as literal as they are figurative, fitting in the anime aesthetic geniusly. The track feels deep, like Abel Tesfaye’s first few releases. Now that only question that remains is: does Teflon Sega have the ability to reach the same levels? Only time will tell. 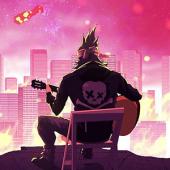