The Foxies, Image by Libby Danforth

It’s been a while since I listened to a band that got me strutting in circles around my room, blasting out rock music, and shouting along to the lyrics like some edgy, heartbroken teenager. Don’t get me wrong though - rock is a universal genre for me, and The Foxies certainly do not limit their audience to a particular age group. In fact, it’s their ingenious lyrics, charismatic stage presence, grungy guitar riffs, and dazzling melodic hooks that led to their widespread success with nearly 100k monthly listeners, and earned them the opportunity to open for rock-and-roll icon Billy Idol’s 2021 tour.

Based in Nashville, Tennessee, frontwoman Julia Bullock, guitarist Jake Ohlbaum, and drummer Rob Bladley have released their debut album, Who Are You Now, Who Were You Then? on the 23rd of September. With lyrical themes like heartache, unleashing your wildest fantasies, self-discovery, and discovering someone else’s body, this album is sure to inspire punk rock fans for generations to come. “More than anything we’ve done in the past, this record taught us who we are,” says Ohlbaum.

Their introspective lyrics pair so well with the band’s mastery of electronic hooks and melodic development. Each and every song on the album comes with its own shiny chorus that you can belt out in front of your mirror using your phone as a mic. Melodic prowess isn’t anything new for The Foxies, though - their incredibly catchy single “Timothée Chalamet” went viral as a TikTok trend in 2021, which the music video pays homage to:

The band’s creativity when it comes to marketing doesn’t end there. The rollout of their latest single, “I Don’t Wanna Want It” involved shooting promo clips in parks and children’s playgrounds with Julia, Jake and Rob radiating genuine joy and charm. It was also a TikTok poll that led to this banger being the 4th single from the album.

There’s something so charismatic about Julia Bullock’s energy in every single music video they release. Nothing too fancy going on in this one - purple strobe lights, flashing cutscenes and erratic camera movement, but the simplicity is a perfect canvas for the trio's chemistry to shine.

You ever want someone so much that physical contact isn’t enough, you need to literally get inside their skin? “Headsweat,” the album’s first single, encompasses that feeling with lyrics like “I wanna get you in a spot I haven’t found yet/I wanna feel you, wanna feel you from your headsweat” and “It’s really kinda fuckin’ sick/The way you fit me.” The lyrics aren’t the only part of the song dripping with smooth sexual tension - the sliding guitar riff in the chorus and the fat snare sound match Julia’s sass and vocal dynamics perfectly. The music video is colorful and fun, and the “na na na na ooOOoo” is going to be freeloading in my brain for the foreseeable future. We had the chance to chat with The Foxies ahead of their recent release, inspirations, and more.

WE ARE: THE GUARD: We’re so excited for the release of your debut album! How does it feel to finally have it ready and almost out in the world?

JULIA: Considering we had no idea we were writing an album, I’m very excited! It was one of those happy accident, kismet moments. We had spent two years building who we are today as artists and as people, and it just made sense to put out a body of work that takes the listener through our personal growth journey.

WE ARE: THE GUARD: Can you tell us about your biggest inspirations while writing and producing the album?

JAKE: We really wanted to do two things.  We wanted to honor our past work, honor what "works" for us as a band and stick to what we know, but we also wanted to think outside the box.  There's weird samples on this album, toy pianos, acoustic guitars, and so many other sounds that we never considered before.  Bands and artists like Beck, Foals, Scissor Sisters, Cake, Kate Bush, and The Shoes were some of my personal favorites to reference.  Of course there were our usuals, we love our Bowie, Blondie, No Doubt, and Third Eye Blind records.  Those will always be part of our DNA.

WATG: What was the experience that made you all realize that music is your calling?

JULIA: I was ten years old watching Green Day live on their American Idiot tour. And I thought to myself “well if he can be a rockstar, I can too.” And it’s been the one thing in my life that I have always been sure about.
Rob: I was playing at my high school battle of the bands, and my dad came up to me after the show and said he’s never seen me happier in my life. Since then I couldn’t think of anything else I’d rather do.
JAKE: Bruce Springsteen and the E-Street Band when I was 9 was a huge moment.  I don't know if I realized it was my "calling" until a few years later, but that show planted the seed and it's been impossible to focus on anything else since then.

WATG: What made you realize you all gel well enough together to form a band?

ROB: Well, I’m not sure we knew it was happening, it just kind of happened. We all assumed our roles and just did the work that needed to be done. Over time, we just realized we all have such a strong friendship and that glues us together.

ROB: Oh boy, this could be a long list. Brandon Boyd from incubus has to be one of my favorite artists of all time. He is an amazing visual artist, lyricist and overall seems like a super down to earth person.

WATG: How do you want people to feel when they listen to your music? Do you keep that in mind while writing?

JAKE: I personally try to think of our audience more sparingly/sporadically when we are working.  Sometimes, going too far down the rabbit hole of "what would THEY like?" can stifle creativity, and then we end up making bad stuff.  It's better to focus on what WE like, we have a much higher chance of success if that's the focus.  This album is so nostalgic and diverse, so I hope people feel seen when they hear it.  I hope they also want to dance face and be part of the journey :)

WATG: What’s next for you as a band?

JULIA: Conquering the world with love and rock n roll of course!  Can't wait to get to work on our NEXT project.

For our readers in Europe, watch The Foxies live on their Europe tour this fall! 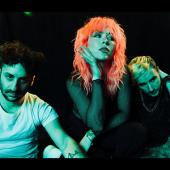