City Terrace, California's The Golf Club illustrate just how far singer/songwriters have become in the 21st Century. It's not all boring folk music anymore.

For the longest time, the term 'singer/songwriter' would conjure either:
1.) Images of overly-earnest 70s musicians
2.) Truly terrifying imaginations of lethally cringe-inducing open mics

Don't get us wrong - you know We Are: The Guard are enormous fans of songwriters, both in front of and behind the mic. We have so much appreciation for the Carole Kings, the Jackson Brownes and Joni Mitchells, the lyrical genius of Bob Dylan and the outstanding musicianship of James Taylor. We have to be honest, though, the brown rice/blue denim folk music of the 70s eventually faded into nothingness, like an old photo left to fade in the sun. As the decade progressed, 70s singer/songwriters left less of an aftertaste than seltzer water.

Singer/songwriters fared even worse in the 80s, when they paired their blandness with some of the worst production trends of that decade. As if overly-earnest, often drearily depressing acoustic music weren't enough of a hard sell, digital banjos are more than anyone should have to bear.

Clearly, the genre needed an update.

What it means to be a singer/songwriter has changed completely in the 21st Century, luckily enough. These days it's increasingly common for musicians to not even be in the same room together. This has been true for years but has become nearly universal due to COVID-19. Today's singer/songwriter teams are less Carole-King-hunkered-down-over-an-upright-piano-in-the-Brill-Building and more a producer-laboring-in-their-bedroom-or-studio, laying out all the beats and music and handling all the production after the fact. It's truly a hybrid of today's Pop scene, where popular songwriters pen hits for the top musicians, and the talent and sincerity of the singer/songwriters of yore.

James Taylor would be the last thing to cross your mind when you hear The Golf Club, a new indie singer/songwriter duo from City Terrace, California, whose sound owes far more to glossy 2000s indie rock updated with a modern synthetic sheen.

The Golf Club first started turning heads with "soda stain," their debut single, and with good reason. Its soul-infused lofi pop brings to mind the stripped-down, irresistibly-catchy pop of bands like OK Go or Phoenix but with a more mellow pallet, soft and gentle and worn in the best possible way, making "soda stain" suitable for listening over and over and over and over again.

This is ramped up with "Dirt," The Golf Club's newest single, with its head-nodding boom bap beats making the perfect setting for Elliott Cain's vocals which glow like some backlit cubic zirconia.

This is excellent news as The Golf Club only have the two singles so far. Both hold up to repeat listening excellently, lucky for us. It'll be at least a couple of months before We Are: The Guard gets tired of “soda stain" or "Dirt." Hopefully they'll release some new music soon! 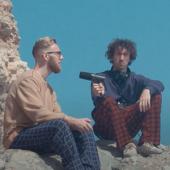