FEATURED‌ ‌FIND:‌ THE MARÍAS ARE AN INDIE SOUL MOOD YOU’LL NOT SOON FORGET

There’s this intangible excitement when a band you dig is coming to town. Wait, you mean they are really going on tour and hitting my off-market city? Really really? What absolute luck. Especially after coming out of a worldwide pandemic where live music felt like it could potentially be a thing of the past. So when I saw that The Marías had a date in [town redacted] at the beginning of 2022, my throat tensed as my heart tried to leap its way up and out of my body. I was spiraling with excitement as my phone navigated itself to the ticket buying website only to find out the show had already been sold out. But wait, other people already knew about the hot new neo-psychedelic soul of this Los Angeles foursome? How? That’s my job. My job is to break new artists from the internet to our loyal readers. That is the fundamental function of these Featured Finds posts after all. We’re trying to be ahead of the curve so then you can be ahead of the curve. Sharing the sounds we find with you so you can share them with your friends and look like killer tastemakers in the process. And you are absolutely a killer tastemaker. I mean, look what website you’re on after all.

The hook is, this isn’t The Marías first outing, just their hotly anticipated debut full-length album, CINEMA. So, hop on these songs now before you slip even further behind the curve and their music is on all the radio stations, and everybody you know is vibing out to this very specific sound of laid back intensity, and you are just sitting there wondering where it all went wrong.

Oh no, wait, turns out they’re not sold out at all. I was just on the wrong website. Okay, brb, buying one for everyone I know.  And now you know too, so make sure to get yourself on this before they're all gone. With a presence as bomb as The Marías have, they’re bound to be the next big thing. Listen before it’s too late. Learn from my potential mistakes.

THE MARÍAS - “CALLING U BACK”

“Calling U Back” is hot. A little too much maybe. I’m sweating under the collar. With it’s dripping drums, heavy bass, and dueling, nearly whispering vocals, this song absolutely bangs. A certifiable hit. This is something that you’d hear at a party and need to know more. Where are they from? What other songs do they have? What bands do they cite as influences? When are they going on tour? Are they coming to your town? Did it already sell out? This track feels heavily influenced by ‘90s trip-hop while also staying hip to what’s going on in both dance music and the malaise pop subcultures right now. This is as full of a package as anything I’ve heard as of late. Hitting all of the quadrants. Expect remixes. Expect hearing this just about everywhere. Expect greatness.

“Hush” has the kind of beat that’s going to infect your brain. It’s going to stay there for weeks and you’ll be humming along not even sure where this memory of music came from in the first place.  And then out of nowhere it will break and you’ll hear ‘hush’ and it’ll all come rushing back. The Marías are a bit of a throwback to the alternaradio of 1997, a little Hole, a little Veruca Salt, but with a kind of sultry darkness that is expertly mirrored in their music video aesthetics. If “Calling U Back” is the hit that brings them into the stratosphere, “Hush” will be the anchor through the rest of their career.

The final song on the record never gets a video, but “Talk to Her” with it’s downtempo spoken word has struck a nerve with us at We Are: The Guard. Give the album a whole play and you’ll make it to a real treasure. 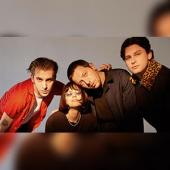