FEATURED FIND: TIMMS IS A DREAM COME TRUE FOR THOSE WHO LIKE IT DARK, BUT ALSO A LITTLE FUN

Weird, heavy, smooth… South Africa's TIMMS might have it all!

Today's ravers and hip-hop heads sometimes don't know how good they have it, especially if you have a thirst for style or whimsy. In the 90s, if you wanted a dose of childlike wonder served with some beats, you were forced to deal with "happy hardcore." You don't know horror until you've heard the Care Bears or Smurfs theme songs at a gabber-rific 180 BPM.

But what if you have a thing for heavier music? On the EDM tip, this means Monster-guzzling brostep. As for hip-hop, too often it can mean (but not always) either violence that would make Freddy Krueger blush, or unchecked misogyny. Isn't it possible to enjoy some bass without having to wade through the absolute worst aspects of humanity?

South Africa's TIMMS is a dream come true for those who like it dark and hard but also have a little childlike wonder left. Take "Tamagotchi," Timms' glitched out, exotic new single, in which she threatens to carry a lover around in her pocket like a virtual pet. On "Tamagotchi," her voice brings to mind the digital disembodiment of Fever Ray or The Knife while, musically, she's carving out a similar sonic world to Hyberdub's Fatima al Qadiri.

Both of those artists skew towards the dark and sometimes disturbing, though. That's not to say that TIMMS’ music can't get a rise, but it's more of a "overdone it on edibles" than "running from an axe murderer."

TIMMS has been so kind as to grace We Are: The Guard with an interview, to help all of us get to know her better. She's only got 4 singles out, but has made it clear that she’s a force to be reckoned with.

WATG: Hey there, TIMMS! Thanks so much for chatting with us. As 2021 enters full swing, what's on the horizon for this year?

TIMMS: I have a bunch of new singles coming out, starting with “Tamagotchi.” I have a couple of collaborations that I am super excited about, but I'll keep those a secret for now because every relationship needs mystery. There's a possibility of an EP before the end of the year. I'm getting a cat in September, and her name will be Catpurrnicus The Third even though she will be my first cat. I just thought it sounded more regal.

WATG: We're so excited about "Tamagotchi!" Can you tell us about the process of writing and recording it?

TIMMS: “Tamagotchi” was a Zoom baby with myself, Nick Smith (who produced it), Perrin Xthona from NOT THE MAIN CHARACTERS, and Maria Landi. I told them I wanted to do a song with top energy and “Tamagotchi” came out of it.

WATG: How did you get started in music? Is it always what you thought you'd be doing?

TIMMS: When I was 8, I discovered how bad I was at sport and math and realized my options were limited, and I don't think I'm a very good dancer. Also, I really wanted a job with intensive instability where I could express my mental health issues... But in all seriousness, I always knew I wanted to be in music because I would watch live shows as a kid and wanted to do what they were doing so badly. I loved watching the way the audience reacted and I wanted to make people feel that way.

WATG: Is there anyone you love collaborating with?

TIMMS: Not Famous and NOT THE MAIN CHARACTERS.

WATG: Who’s an underrated artist we should know about?

TIMMS: Honestly same answer, Not Famous and NOT THE MAIN CHARACTERS.

TIMMS: Success for me would look like a world tour.

“Tamagotchi” is available now on all streaming platforms! 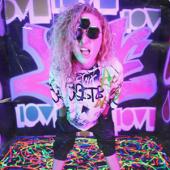