Adam Levine thinks there are no bands anymore. In a recent interview with Zane Lowe on Apple Music, The Voice judge (emphasis on the singular “Voice”) took to the mic to decry the lack of musical collectives in the current pop landscape: “That’s the thing that makes me kind of sad, is that there were just bands. There’s no bands anymore, and I feel like they’re a dying breed.” And while we’re sure the habitually half-naked musician meant well by his comments – which came while promoting, erm, his band’s newest single – something tells us Mr. Levine is yet to meet TRAMP STAMPS.

Hailing from Nashville, Tennessee, TRAMP STAMPS are not only here to remind us bands are alive – but also very much kicking (ass). Comprising of singer Marisa Maino, guitarist Caroline Baker (aka carobae), and drummer Paige Blue, the girl group arrived in a blaze of glory in January 2021 with their debut single “Sex With Me.” Sounding like Josie and the Pussycats if produced by 100 gecs, the three-minute bop couldn’t make for a more perfect introduction to TRAMP STAMPS’ breed of brash, irreverent, and entirely unapologetic feminist-pop. Mixing lyrics about f*ck boys with Avril Lavigne-esque alt guitars, it’s an empowering, cavity-defying sugar rush that deserves pride of place in every Girl Power playlist.

TRAMP STAMPS - SEX WITH ME

TRAMP STAMPS’ meteoric rise continues this March with the release of their sophomore single “1-800-miss-ur-guts.” Produced alongside We Are: The Guard favorite carobae, the song focuses on the rise and fall of a teenage crush as set within the confines of small-town America. “Just a Tumblr girl/And a skater boy/Wish I could go back/Back to Illinois,” aches Marisa Maino in the pre-chorus. It’s purposely soft and nostalgic – like a high-school love letter scribbled using scented glitter gel pens – showcasing TRAMP STAMPS’ capacity to move from the audacious to the emotive, and seamlessly back again.

Despite having only two singles to their name, TRAMP STAMPS are already lining up alongside the likes of GIRLI, Charli XCX, and Nasty Cherry as women with something to say – and they’re not afraid to say it. Indeed, in the band’s own words: “We want to remind everyone that being empowered doesn’t have to feel so heavy all the time – you can show that other, lighter side of yourself, and still say something important.” From their reappropriated alias, to their Twitter bio (“Make tampons free”), to their activist emo anthems, TRAMP STAMPS are already well on their way to recentering feminism at the beating heart of pop music. And with women’s rights and personal sense of safety coming under threat on a seemingly daily basis, we need this kind of defiant action now more than ever.

Oh, and let’s be honest – they’re far better than Maroon 5. 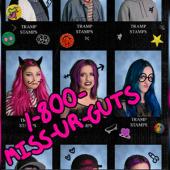