Lo-fi is a funny beast. On one hand, it's about appreciating the past - digging through record crates and YouTube channels for obscure vintage City Pop, experimental jazz or watching VHS rips of long lost children's television. Yet, if you take off the rosy goggles you'll quickly realize that just because it's old or obscure does not necessarily mean it's good. Sometimes, a moment of clarity will descend and you'll realize you're just watching a poorly made movie, with cardboard production values and a terrible script. Sometimes things are forgotten for a reason.

WILL DAVILA - YOUR LOVING

Any artist working with a lo-fi aesthetic needs to find the balance between these two polarities, appreciating the past without necessarily romanticizing it. You also don't want to just create some generic nostalgia. If you're not careful, this can come across like some boring ol' Dad Rock with an Instagram filter on it.

Pasadena's Will Davila truly finds the balance on his low-key, understated indie pop. Take his most recent single "Bathing in the Sun," with its bedrock of 80s synthpop and minimalist machine beats for Davila's dreamy vocals to soar and crest above. Sonically, Davila's music brings to mind 2010s-era indie rock like Devonte Hynes’ Blood Orange project, or the lazy guitar jangle of Real Estate. Davila manages to avoid the cynicism of much nostalgic music while still managing to sound tight, refined, and focused. This is lofi 2.0, musical while still being mellow, relaxing without being ignorable.

WILL DAVILA - BATHING IN THE SUN

This may have something to do with Davila's pure motivations for making music. "All I want to happen is for people to enjoy the music and have some part of the song that they relate to, which hopefully forces them to have a good time listening to it."

We Are: The Guard recently had occasion to catch up with Will Davila to discuss his process, his new EP Super Great (which is, in fact, super great).

Will Davila took some time out to answer some of our questions. Keep reading to learn about Davila's new EP, his motivations for making music, and his awesome knife collection!

WE ARE: THE GUARD: Hi Will! Thanks so much for chatting with us. Congrats on the release of "Super Great." Can you tell us about the process of writing and recording the EP?

WILL DAVILA: Thanks! Super Great ended up being a handful of songs trying to make the listener feel good. All I want to happen is for people to enjoy the music and have some part of the song that they relate to, which hopefully forces them to have a good time listening to it. The love songs are thrown in there too because love is super cool and makes me feel happy, and I can't not spread that. I record pretty much everything at my desk, with the exception of some drums.

WILL DAVILA: I'm hoping to book some gigs during the summer in LA, and in the fall when I'm in Boston. I have a few songs that I'm working on that might put together another EP this year? Who knows? I don't. That would be cool though.

WATG:  Can you tell us about your first musical memory?

WD: The earliest memory I have involving music would have to be when I performed "I Want to Hold Your Hand" by The Beatles at the talent show in kindergarten.

WATG: Do you have any secret talents or hobbies outside of music that people might not guess?

WD: I am a very big basketball fan, but am not a fan of any team in particular- I just like watching and knowing stats and stuff like that. I enjoy my fair share of video games and petting my dogs. I also have a pretty cool knife collection.

WD: What really made me want to make my own music was listening to Theo Katzman, Mac Demarco, and Rex Orange County. Those artists probably aren't the most inspiring for me right now, as I'm always trying to hear new things and introduce myself to songs I haven't heard before. Those guys certainly left me inspired though.

WD: My family has always supported me endlessly and inspired my music career. I am also forever thankful for my friends, who inspire me every day by being awesome.

WATG: To end with a fun one, if you could invite 3 people -dead or alive- to a dinner party, who would you pick and why? 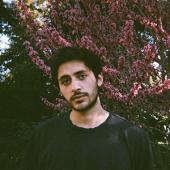