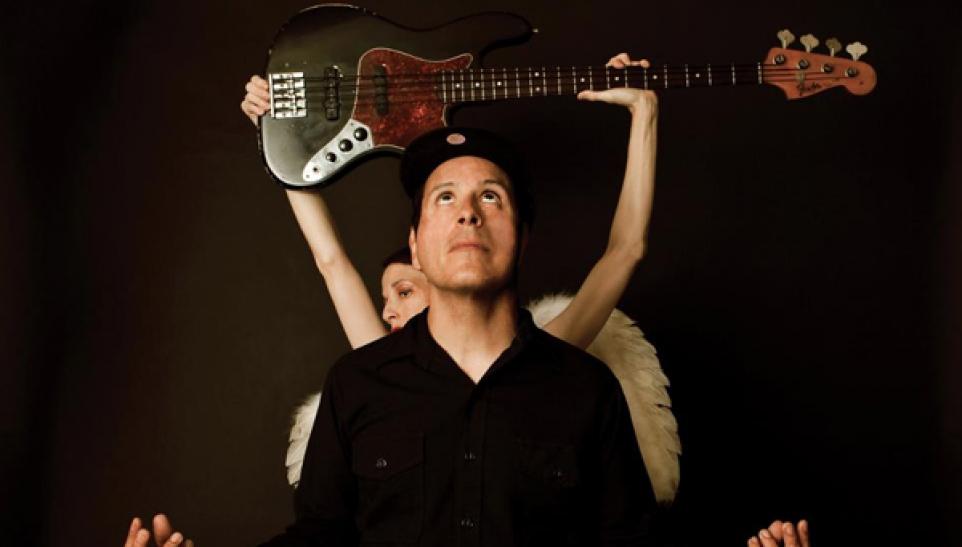 Curator Find: Word play, i.e. puns, is the lowest of low comedic endeavors. Well, it's either puns or mimery. The jury is still out on that one.

Anyway where was I? Oh yeah, I was working towards an introduction of Lisa Papineau and Juan Alderete's band Big Sir. Sure, the name is a question mark...is it a reference to Big Sur or a Big "Sir," but if Pavement, Badly Drawn Boy, Apples in Stereo, Yuck, tUnE-yArDs, etc. have taught us anything, it's that you should never judge a band by its name.  Either way I like it.

Both Papineau and Alderete are better known for their work on other projects. Alderete is or was the bassist for Mars Volta, Racer X, and countless other bands. Papineau has lent her vocal stylings to artists such as Air, M83, Rentals, and P.O.D. (Wait, what? How the fuck did they get in there? Nice curveball, Lisa).

For all intents and purposes, it seems that Alderete has always been a kickass, rock star bassist. Papineau, on the other hand, seemed to fall into music by accident. In college she went from studying anthropology and religious systems of thought to taking up an interest in multimedia and performance art. As she began to work on her art she found herself gravitating more and more towards music.

She eventually decided to focus her art there and began to collaborate with several artists. Eventually she met the composer Tyler Bates and they formed the band Pet, which interestingly enough also featured Alderete on bass. Shortly after Pet broke up, Papineau and Alderete began collaborating on a project that would eventually become Big Sir, and we're all very thankful to them for doing so.

A few years ago Lisa was diagnosed with multiple sclerosis, yet amazingly this hasn't slowed down her artistic output. If anything, it's actually caused her to be more prolific. Since the diagnosis she's guested on several albums and soundtracks, put out her own solo album, collaborated with Matt Embree under the moniker ME & LP, and of course produced her most recent work with Big Sir.

As a result, she's clearly hitting her stride as a singer and a songwriter. With Alderete's help of course.

Earlier this year the duo released their 4th studio album, Before Gardens After Gardens, and it's their most concise and focused effort to date. The album opener, "Regions," acts as the perfect introduction to anyone unfamiliar with the band. The track is a pristine cocktail of jazz, lounge, and pop music, with some other influences scattered in the peripherals.

Lest you find that too straight forward, they mix things up on the very next track, the dizzying and highly danceable "Ready on the Line." The song is below; you know the drill.

In a city in which everyone is trying their very hardest to stand out and be unique, Big Sir does just that better and more effortlessly than most anyone else. Lisa and Juan are two very talented musicians who deserve support, for their work in Big Sir and also the litany of other projects they have going on. (I don't know either of them, let alone on a first name basis, but I'd grown tired of typing their rather cumbersome last names.) Listen to the music we've posted here and on the links scattered through out this piece (and then buy it!). I really think you'll enjoy it.

Before Gardens After Gardens is out now via Rodriguez Lopez Productions. You can buy it at all reputable record stores, both physical and digital. You can stream the whole thing over on Big Sir's bandcamp page. Just listen to it, dammit.