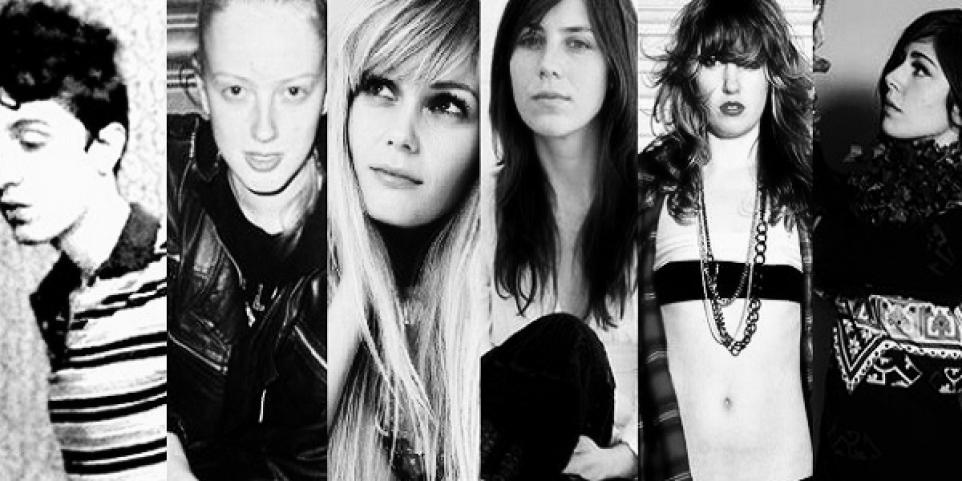 Indie to us is not about drainpipes jeans, dirty pumps and shaggy bangs. Indie to us is in-de-pen-dent music, penned by anyone from classically trained LA ladies who sing of Greek mythology (hey, Julia Holter) to Danish quasi-soul groups who look like they've just stepped off a 50s B movie spaceship (hey, The Asteroids Galaxy Tour). Yup, that's what we call the BEST of Indie: artists making creatively killer music, not artists with a contract with Converse All Stars. Ahem, /rant over...

Beach Fossils were one of the more memorable artists to emerge from the 2010 surf movement, their eponymous debut album of that year a genuine jangly delight. The band are currently working on their full-length follow up, but while we wait, they've treated us to a new 7", out February 21st via Captured Tracks. A-Side, "Shallow," is a lushly produced chime-delight with a subtle fuzz contour.

Yeh, that's right, more CRIM3S for ya (who are CRIM3S, you say? Read this y'n00b!). Forgive us, but, BitCandy are so bewitched by this LDN duo's druggy drops we can quite resist serving up another slice. Enjoy the disorderly damsel-shouts of "SALT," below (hey, Crystal Castles, better watch your backzzz).

The Asteroids Galaxy Tour "Out of Frequency" / "Dollars in the Night"

The Asteroids Galaxy Tour are a quirk hailing from Copenhagen, Denmark, who you may already know for "Around the Bend," which featured on an Apple iPod Touch commercial, or the equally ad-friendly "The Golden Age," which was championed by Heineken beer. On January 31st, the European sextet dropped their second album, Out of Frequency. Check out the title-track, and another album highlight, "Dollars in the Night," below. Believe us, once you get past Mette Lindberg's pubescent vox, you realise this quasi-60s soul band are really freekin' fun to listen to.

Imperial Teen "Out From Inside"

Feel the Sound is Imperial Teen's first album in five years. But oh boy, this super group are still on top of their lush-harmony game. Enjoy LP highlight, the sunny, so-made-for-cruisin' number, "Out From Inside," below. Indie-pop at its melodic finest, we say.

Julia Holter "In the Same Room"

On March 8th, Julia Holter will release her second album, Ekstasis. Taster track, "In the Same Room," is an ethereal being, drenched from head to toe in sunlit reverb. Full of intrigue, this beautiful nightmare continues forth the mythological mysteries previously presented on Tragedy (which was based on the Greek play, Hippolytus).

BitCandy are so psyched for Anxiety, the follow up to Ladyhawke's 2008 debut (where ya been Pip?), we could explode in a fireball of check shirts and tussled blonde hair. We've already heard lead single, "Black, White and Blue," and now the Kiwi queen -- who recently revealed Anxiety's (Revolver-stylee) artwork -- has just unleashed a trippy remix of the aforementioned track, which sounds as if it was spun up by The Big Pink in an underwater chasm. Dig it right now (and FYI, Anxiety drops March 19th).

(Yeh, much more fun than the Matthew Broderick fantasy movie of the same name.)

Chairlift "I Belong In Your Arms"

"I Belong In Your Arms" is the latest single to drop from Chairlift's Something (an album BitCandy were totes crushing on before the rest of the blogosphere). Patrick Wimberly recently informed Chicago cool kids, Pitchfork, that the LP was penned while he and Caroline Polachek were "very in love -- not with each other." This is an unsurprising revelation going on this shimmeringly lovesick new single, which officially closes down this week's Best of Indie.