Born in a town of 1600 people in Iowa, HAVEN knew from a young age that her talents would take her elsewhere. She grew up playing sports, but later shifted her attention to music due to health complications.

At age 12, she moved to Nashville to be immersed in the world of songwriting. In Nashville, HAVEN went on to be connected with huge artists including Lady A and Hunter Hayes, sharing stages across America. Though Nashville is a hive for country music, HAVEN was actually exposed to writing pop and other genres while there. Inspired by musicians like Shania Twain, Julia Michaels, and Bazzi, HAVEN’s writing combines the depth and storytelling of country lyricism with catchy pop melodies and smart production.

In November of 2019, HAVEN released her debut pop single “Swimming In Your Feelings.” In addition to writing and performing her own songs, she also cowrites and most recently wrote and sang on “Dance Like Nobody’s Watching” performed by Iggy Azalea and Tinashe. HAVEN’s original songs have resonated with audiences of all ages, landing “Hoodie In The Summer” on Fresh Finds, and “RN” on Radio Disney’s top songs.

HAVEN just released “Asking For A Friend,” a tongue and cheek, yet longing jam about wanting to know who that special someone is with (but she totally doesn’t care, she’s just asking for a friend *wink wink*).

HAVEN - “ASKING FOR A FRIEND”

We had the chance to ask HAVEN some questions about “Asking For A Friend” and her musical journey.

WE ARE: THE GUARD: "Asking For A Friend" just came out and we love it! Such a cool concept. We'll go into the lyrics a little later in the post, but we'd love to know more about where the idea came from and the process of making the song!

HAVEN: Aw thank you so much! I’ve been so excited for “Asking For A Friend” to come out! I wrote it awhile ago with my producer Emile! I wanted to capture the feeling of missing your ex, but in a more lighthearted way.

WE ARE: THE GUARD: What do you and your music stand for?

HAVEN: If listeners could take one message from my music I would want it to be that it’s okay to feel all of the emotions. I hope it makes people want to get up and dance, or remember to call a loved one, or is something that they can relate to if they’re going through a breakup or hard time. It means the most to me when people say they relate to one of my songs or it helped them through a hard time. Music is healing.

WATG: How does a typical morning get started in the world of Haven? What’s a typical routine? Has that changed due to COVID-19 and if so, how?

HAVEN: My ideal morning is waking up, doing a quick workout, shower, maybe have a little dance party to hype myself up for the day, and then I head to the studio. The first couple weeks of Zoom sessions/quarantine I kinda skipped a few showers and workouts, rolled out of bed, and got on my Zoom writes (if I’m being honest lol). But I’m starting to get back on a workout schedule and getting ready for the day (even if it’s on Zoom). I feel better when I act like I’m going somewhere haha.

WATG: If you could go back to your first time you sat down to write a song, what would you tell yourself?

HAVEN: I would tell myself to not think, and just feel. Those are where the best songs come from!

Here at We Are: The Guard, we love asking artists to dissect their recent songs. We asked HAVEN to share the lyrics and thoughts behind “Asking For A Friend.”

HAVEN: This lyric was inspired by a time I was at a party and my ex was there with someone else and you feel so awkward / lonely. LA’s such a big city, so I never thought I’d need to worry about that lol.

HAVEN: This chorus is my mood when I say I’m over him, but also am checking on his insta every other day lmao

HAVEN: Thank god I’ve never had a friend who went after my ex, but songwriting is telling stories and I thought that’d be a good little plot twist

HAVEN: My producer Emile always tries to get me to “rap” (which I don’t rap), but sometimes it’s fun to write fast paced lyrics, so I started writing this bridge. It’s pretty much me talking to myself, giving me advice and hyping me up at the end.

You can stream “Asking For A Friend” now! 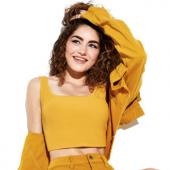