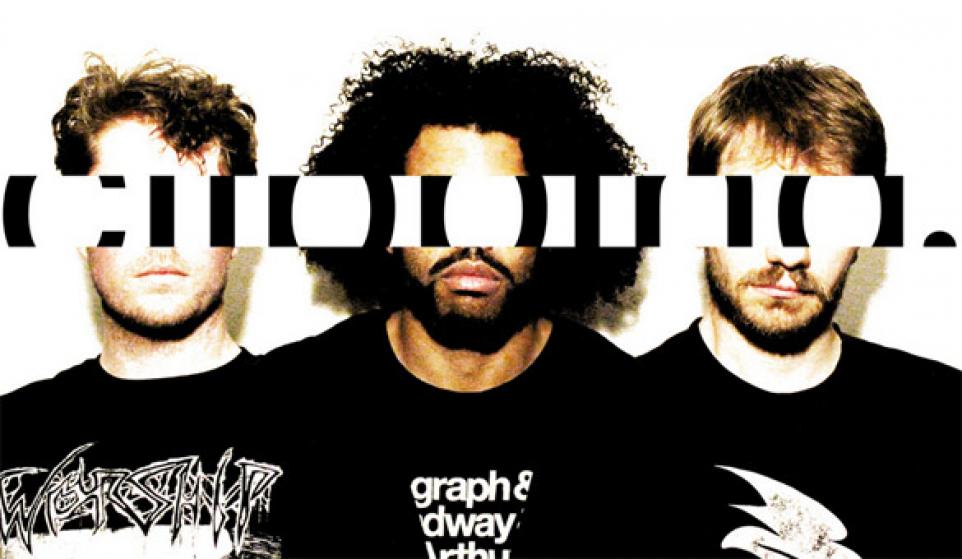 There are these stupid Cadillac commercials that have been on since the Oscars with the stupid tag line, “Only those who dare drive the world forward.” Perhaps you know which ones I’m talking about. #DareGreatly

Despite my dislike for this ad, I keep coming back to it as I try to write about the experimental Los Angels hip hop band clipping. Like Fun., the period is a part of their name. Innovation. Unlike Fun., they’re taking their chosen genre and turning it on its head. (Sorry Fun. fans, remaking Billy Joel songs for millennials really isn’t that original.)

Whether or not the #clippingrevolution ever takes hold in mainstream rap remains to be seen. But as a genre known for its innovation, these guys seem to be testing its outer-limits. These guys get compared to My Bloody Valentine every so often, for both the bone-crunching noises they create, and the fact that no one has heard shit that sounds like this before. At least not without getting something metal caught in a lawnmower.

clipping. may not do to rap what MVB did to shoe gaze, but gawddamnit, they’re gonna try.

The trio of MC Daveed Diggs, William Hutson (Rale), and Jonathan Snipes (Captain Ahab) have been making music together as clipping. for the the better part of this decade. Diggs and Hutson went to grade school together, while Snipes and Hutson were college roommates. They began as a remix project, but soon started to work on original material. In 2013 they self-released their first LP Midcity, although one might argue that was more of a mixtape. Six months later they signed to Sub Pop, becoming only the second rap group ever to do so (Shabazz Places was the first).

Last year they released CLPPNG, their Sub Pop debut, which found its way onto several year-end lists. Even in today’s hyper-speed culture, the rise of clipping. has been as unexpected as it has been meteoric. Here’s to hoping they don’t slow down.

“clipping. makes party music for the club you wish you hadn’t gone to, the car you don’t remember getting in, and the streets you don’t feel safe on; are phantom broadcasts bleeding into Power 106 as you drive out of range; are twenty different rappers looking into one broken mirror, talking to themselves all at once; are classic west coast rap music out of the tradition where sounding different wasn’t cause for fear” (Press release for Midcity, September 2012)

Reading the above, it’s safe to say that clipping. had no idea how popular their music would actually be. Even then though, this is not for everyone. It’s abrasive and jarring, even for fans of hip hop and noise rock. But if it clicks for you, you become like a vegan-crossfitter-athiest hybrid. Everywhere you go you just can’t shut up about this band and how great they are. You say over-the-top shit about how they’re breaking new ground and that they’re gonna take hip hop to new places, and soon as it leaks into the mainstream pop culture will never be the same. You may not like how these words taste in your mouth, or how they sound coming out of it. But you realize as your saying them that you’ve never believed in anything with this much fervor and conviction.

That’s the #clippingrevolution in a nut shell. Are you ready to join?