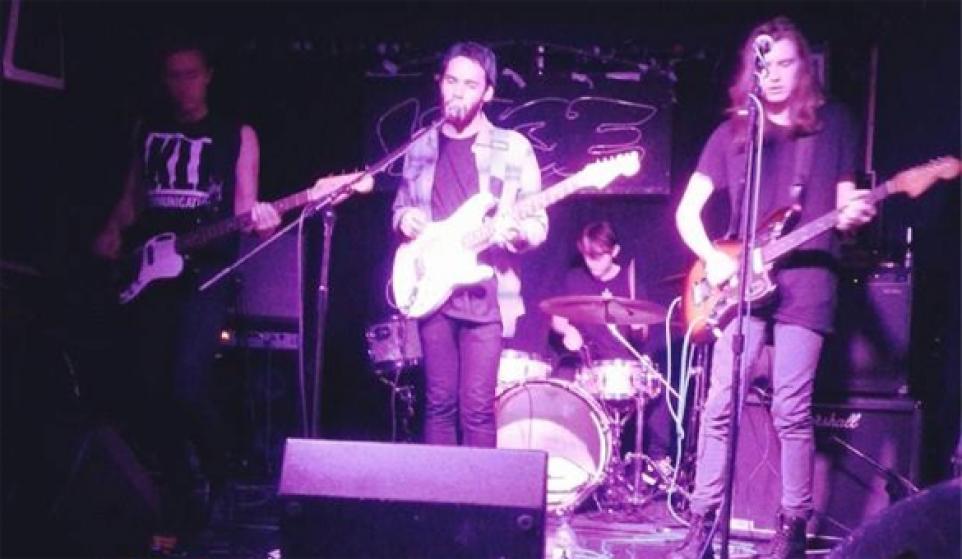 Someone somewhere along the way should have told new artist ex’s that their name is going to make it impossible for people to search for them on the internet. Maybe someone did, and the London quartet just shrugged their collective shoulders and said some cool stuff about how they’re not in it for the notoriety. And how they’d rather people just listen to the music, than reach them on the shallows of the internet with some fancy website.

Yeah, that was probably what happened.

Jonathan Mead, Niall Kavanagh, Callum Brown, and Harry James hail from East London, but they sound like one of those 90’s bands from the Pacific Northwest who just wanted to put their twist on The Pixies. The foursome seamlessly mixes together shoe gaze, indie, and noir wave, sounding more like something you’d hear off a classic Sub Pop compilation than a new band from 2015.

This isn’t to say that ex’s are just tracing the numbers of bands that came before them. They’re forging their own path, while nodding to past influences. It’s like they’re growing up before our eyes.

Speaking of eyes, the opening line to their debut track “Oh Boy” is a doozy. “I wanna get inside your eyes, to see how you see me,” which used to be my goal for every human interaction. Who doesn’t want to know how others see them? He then starts talking about cuddling with spines, which is not necessarily a sentiment I can relate to, but it’s definitely one that caught my attention.  They also lifted those pre-chorus “oohs” straight from “Where Is My Mind?”, which leads me to believe that these dudes are targeting me directly with their music.

Thus far ex’s only have two songs to their name, but both have left an imprint on me. Their music sounds like it could only be made by people who spent their formative years in the dreary climate of the United Kingdom. It’s like these four dudes grew up listening to Cobain, Robert Smith, Frank Black, et al, and when the time came to make their own music they decided to put out their own brand of catchy-yet-sad songs.

There’s a “recorded underwater” feeling to these tracks, my personal favorite staple of the shoe gaze genre. But what ex’s get right is how they add the layers of distortion, reverb, and underwaterness to their music. Their songs aren’t difficult for the sake of being difficult, a common pitfall for indie rockers. Nor are they noisy for the sake of being noisy. Instead, everything has a purpose, even if it isn’t immediately identifiable. What may seem like a mess, or a broken piece upon first listen, later reveals itself to be an intricate part of the puzzle.

Or maybe I’m overthinking all this. Maybe I just love these dudes cause it sounds like The Drums picking up where Black and Kim Deal left off. Who knows for sure. Listen to their music and decide for yourself.

As we wait for ex’s to get off their asses and release some new music, this seems like a good time to tell you about our Bitcandy Curator program. It’s quite simple: You tell us about some unknown of under-the-radar artist, we write about said artist, and then give you money for tipping us off.

Sounds too good to be true, right? Well it’s not. Real life can be awesome sometimes.