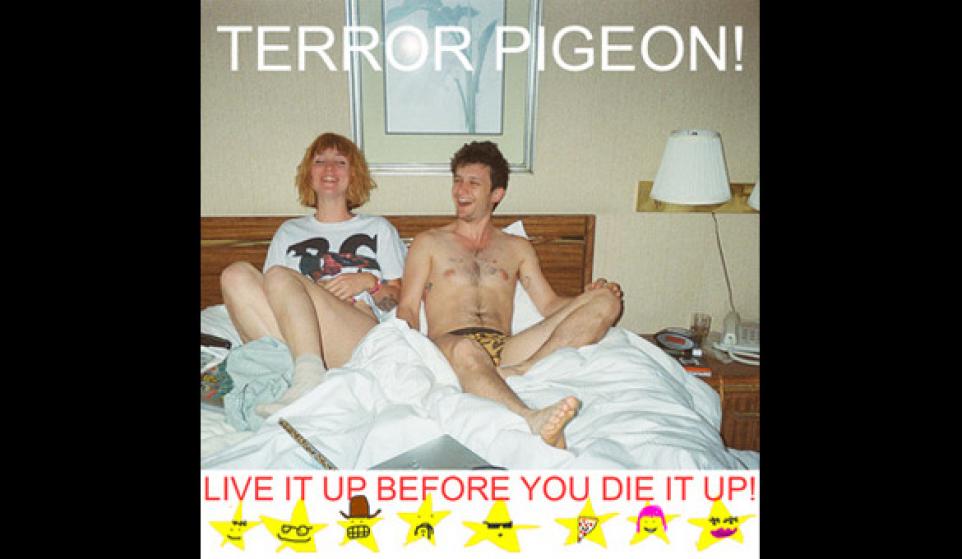 Well, they had us at Terror Pigeon! This is easily the best band name I’ve heard this year, possibly ever. It conjures up images of a huge Godzilla-like pigeon creature with laser eyes destroying cities, mostly by crapping on them. The laser eyes are to fight Mothra. Honestly, with this name, Terror Pigeon! could actually be a pigeon crapping on a MIDI controller and I would think it was genius. Yoko Ono would book them to open for her immediately.

I’m glad, however, that Terror Pigeon! are not actually a recording of a pigeon taking a shit, because that would make them a gimmick and they’re much better than that. With a name like Terror Pigeon! and the current hipstery music climate we’re faced with, they could probably get a way with all sound and fury signifying nothing. I wouldn’t put it past this “party collective,” started by Neil Fridd in 2008 and now based in Nashville, to do something nutty like pigeon crap music (ok this is the last time I mention pigeon guano I swear). Their music is extremely diverse and experimental. I’ve listened to four tracks so far, and they’re all completely different. I don’t just mean a little different, I mean like completely out of the ballpark, different genre, different means of production, everything.

I presume this is what happens when you have one Andrew W.K.-like figure in the middle of all this party craziness, and the rest is a big conglomeration of performance art, music, and excessive use of emojis. Case in point, their website looks like a really virus-ridden computer screen from The IT Crowd and when you pull it up your tab says “Rock ‘n roll butt control.” It’s tough beyond that to explain the high-energy madness that comes screaming out of Terror Pigeon! via pretty much any medium you can imagine. Their bio, website description and Facebook “about” page are just a series of animated quotes like “Let’s party! Fuck yeah!” and “World’s sweatiest band” and “Influences: underwear panties.” The website should give you a pretty good idea, as long as you don’t have a seizure upon viewing.

We are here, however, to speak mostly about Terror Pigeon!’s music. Despite the perceived pandemonium of their website and jumpiness of their at least 30 members, all the music they’ve produced so far is just really well done. Live It up Before You Die It up!, released on Stay Magical records, is their second full-length record, and it’s awesome. Before this they were hailed at SXSW and written up in the New York Times for their performance at CMJ. As you can imagine, their live shows are pretty crazy. Can’t imagine it? Never fear, I have a video!

Most of the reviews I’ve seen online are for the song “Girl!” which I can only assume is Terror Pigeon!’s first single off Live It Up Before You Die It up!. To me, though still a great song with kind of a Phoenix-when-they’re-not-acting-so-damn-French feel to it, by no means covers the full spectrum of the group’s abilities. Don’t get me wrong, it’s still pretty great and fun, but radios might like it (God forbid). It is very pretty though, and shows the collective’s range on this project, because it’s completely different from anything else on the album.

For my money, a track like “BYOYOLO” is just stellar. First of all, the chorus is simply abut 13 people yell-screaming “go and fuck the shit out of your dreams!” Remind you of any Matthew McConaughey scenes from Eastbound and Down? It’s also got a fun, skanky little trap beat and digital 80s video game oversamples a’la Adventure Time, so you really can’t go wrong.

Showing even more diversity is the very next song on the album, “Forget Everything That Makes You Want to Not Be This Band” is totally different, kind of jazzy with accordions and Fridd’s vocals have a touch of They Might Be Giants timbre to them. It’s also kind of anthem-like, just by virtue of the hook, “don’t worry man; it will be all right.” It will indeed, and I do indeed want to forget everything that makes me want to not be this band. Where do I sign up, seriously?

Terror Pigeon! don’t adhere to the usual band format in pretty much every sense of the word. I can see where in some cases this would end up a nightmare, carnage everywhere. There is definitely carnage with this ensemble, but it’s the party kind of carnage, and the kind of chaos which produces something great, interesting, and unexpected in every song they make. Possibly in every chord, if I’m honest. I really would say if you can only pick one band to become your new favorite this year, it should be Terror Pigeon!.

More good news: they have been on tour almost constantly since 2011, so you can bet they will be around to your town sometime soon. Check that completely daft website for tour dates. They’re mostly on the eastern seaboard this winter. Live It up Before You Die It Up! Is available for sale on Terror Pigeon!’s Bandcamp page along with their other releases, but as always I recommend buying from the band’s site if you can, not only because that way more money goes to them but also in this case because they have a clear vinyl offering as well as a postcard with a drawing on it and a “Tear-stained war letter.” I don’t know man, you just have to go to the site and see what I’m talking about. There’s so much fun coming out of this band, it’s just ridiculous. Perking up your winter has never been easier, and let’s hope they work on that giant pigeon with laser eyes. Enjoy! 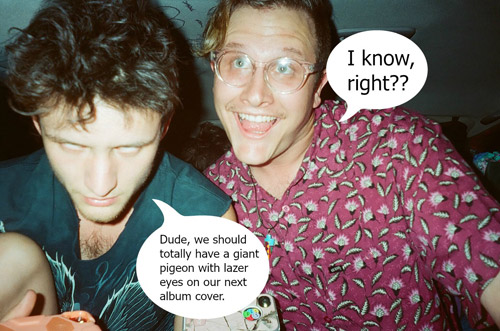