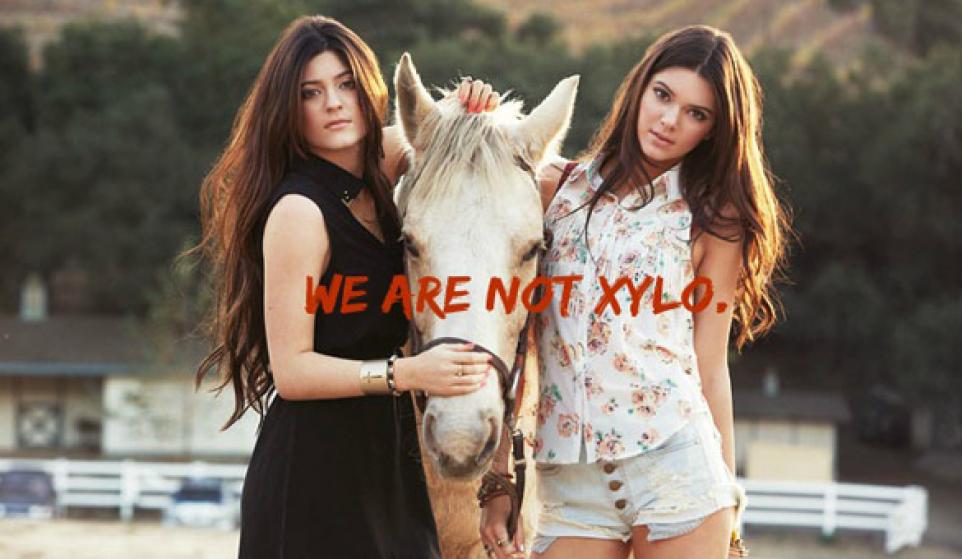 For a minute, I thought our star Curator, Duffster, led us astray. A New Artist find which included Kendall and Kylie Jenner, the younger spawn of the soulless Kris and the perpetually windswept Bruce Jenner? To boot, their debut single was also part of a PacSun campaign, the most horribly bro’d out line of mall retail stores? You can probably imagine my skepticism, and in fact I’m betting you’re not feeling too warm toward this New Artist based on this intro paragraph. I beseech you, however, to hang in there. By the end of the article you will find your fears assuaged. XYLO are actually pretty damn good and, surprisingly for their origin, heretofore pretty un-pop.

Contrary to the usual Kardashian modus operandi, XYLO is largely unpublicized and there is precious little about them other than the few facts I mentioned above. The single, "America," is available in a lot of places for free download and streaming, but mostly on small independent sites like MyPrista.net. The Soundcloud player isn’t even linked to any band profile yet.

There is precious little, that is to say, almost nothing written in press about them other than the fact that the two littlest Jenners are involved somehow. Here’s the actual commercial, which is also not as disturbingly vapid as you would expect:

Lo and behold, however, a scroll through the comments revealed a Eureka! moment, sort of. I’m such a good journalist. It appears that the song was actually produced and performed by XYLO and Chase Duddy, and a search of that Duddy (not Dude-y) name revealed that the music itself doesn’t have anything to do with anyone in or positioned in proximity to the Kardashian clan. Phew! We can rest easy, BitCandy readers and curators, knowing that we do not, in fact, like a band comprised of Kardashian/Jenners.

There still isn’t much in the way of information online about XYLO, but what I can tell you is that they seem to be comprised of a female singer, Paige Duddy, and a producer, Chase Duddy. There doesn’t seem to be any certainty as to whether these two are related or those are just pseudonyms. They have two half-baked singles: “America,” which is the one Duffster found, and a second single which doesn’t have a name yet but which also appears as a promo for the yucky PacSun/Jenner clothing line:

Neither of these singles have been formally released yet, and as I said the band doesn’t even have its own SoundCloud. PacSun seems to be taking all the credit in appropriating the singles so far, to the extent that they had relatively intelligent music curators like Duffster thinking Kylie and Kendall were actually this talented. For shame, PacSun. Chase also has another single he also did for an Adidas campaign involving Selena Gomez, but I don’t hate Adidas as much as PacSun and any video where Selena Gomez isn’t singing her own crap pop, I’m ok with.

So, with all my journalistic sleuthing talent wasted on Kardashians thanks to PacSun, let me go over XYLO’s sound. Production-wise I would call it sort of an ambient dreampop backing sound with marginally dubstep beats. The Selena Gomez track, also not named, is a little more on the funky, hip hop side of things but it still anchored by Paige’s wispy vocals. The production values are very clean and polished, which may be why the Duddys worked with PacSun and Adidas, to get time in a good studio, or Chase Duddy could just be that good with Ableton. I don’t know, but I don’t judge artists’ decisions in matters like this.

Paige Duddy’s voice reminds me a little of EVVY, with a slightly soft, raspy timbre but still very clear. The lyrics of “America” totally crack me up in the context of the PacSun campaign, as they are about how shallow and vapid US pop culture is, with a “get me out of here” bridge. It’s ironic because the clothing line by the Jenner tweenz is called “Amerika,” and PacSun is one of the most “America! Fuck Yeah!” brands out there. It kind of reminds me of when Chevrolet misappropriated Springsteen’s “Born in the USA,” but I digress. The point is the lyrics are beautiful, well-written and thought-provoking.

So, given what I’ve uncovered, I hope that you, the discerning BitCandy readers and listeners, can see that it is perfectly acceptable to enjoy this fun, pretty dreampop outfit called XYLO. I personally will be waiting to see what else this duo come up with in the coming months, and I also hope they’re able to step out of the corporate shadow a little more and are recognized in their own right. Hopefully being featured on BitCandy is a step in the right direction. In terms of following the Duddys, I did manage to find Chase and Paige’s respective Twitter accounts, @chaseduddy and @paigeduddy, and we’ll be sure to bring you more information on these lovely musicians as it becomes available. I promise you don’t have to buy any PacSun clothes to like XYLO.