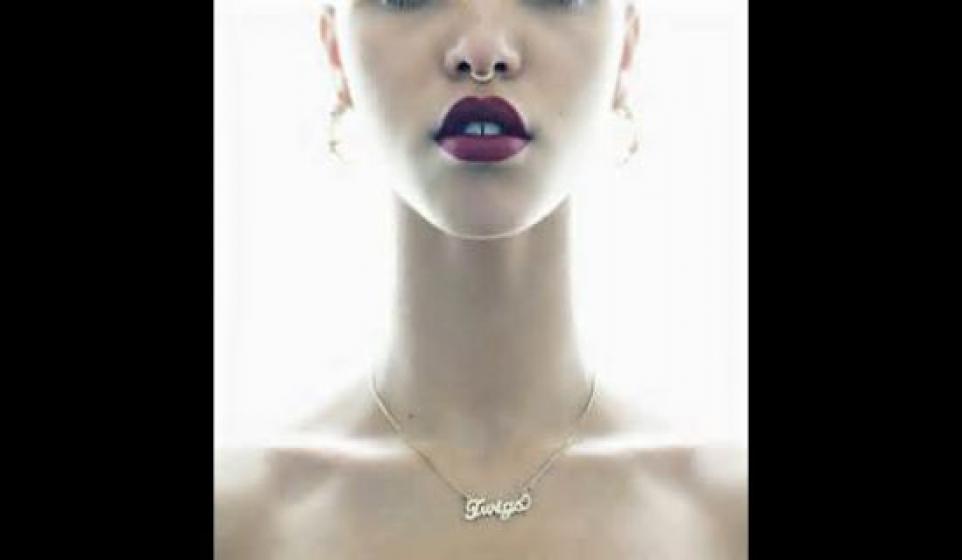 Have you ever wondered what it would sound like if you smashed together Sade, Santi Gold, and the Marquis de Sade into one sound booth and made them sing? Behold, FKA Twigs. With a soft, whispering voice, Hip Hop sensibility, and a definite interest in being choked out, this new artist has blended three elements of culture that sorely needed blending; we just didn’t know it yet.

To say that FKA Twigs’ backing tracks are minimalist would be understating, but there is nothing understated about her vocals and style, despite the slow tempo and quiet, ethereal timbre. I referenced Sade to explain the soft lilt Twigs has to her voice, but I mention the Marquis de Sade as well because of the almost painful tension contained therein. There is nothing relaxing or mellow about this voice; it’s a single thread of a spider’s web pulled taut to breaking by a trapped butterfly. It’s a close-up on Sasha Grey’s face with the sound on mute.

In her two newest videos, FKA Twigs challenges the audience’s comfort level both with sound and with music. The painfully slow-moving vocals, heavy with tension and forever perched, waiting on the next syllable, are put to stark visual compliment in “Water Me” and “Papi Pacify.”

In “Water Me,” directed by Jesse Kanda, the first image seems very simple yet fun, with a close-u of Twigs’ face rocking back and forth to the ambient VOX sample which also comprises part of the beat. However it becomes a little uncomfortable when we’re forced to focus on this face for the full 3:43 as she stares sadly into the camera, singing about unrequited love and lust. A single CG tear wanders around and then drops from her face, and we get a momentary reprieve from the brutal honesty of her face as the camera follows its meanderings through space, only to splash down above Twigs’ head as we’re faced once again with her raw emotion.

It took me a while to get through the video all the way, honestly, just because of how much there is to this one almost continuous image:

If I was uncomfortable with “Water Me,” and had a hard time getting through it, I should have braced myself more vigorously for “Papi Pacify.” I still haven’t watched that one all the way through. If you thought I was just pulling the S&M imagery of FKA Twigs out of my ass for dramatic effect, watch this video, directed by FKA Twigs and Tom Beard:

As much as I’d like to take credit for such an astute musical observation, it’s all right there. This song has a more Hip Hop feel to it, and so apparently demands the forward play and rewind of very graphic black-and-white images of Twigs with a huge dude behind her who is constantly either exploring her oral cavity like he just dropped a diamond down there, or choking her.

My uncomfortable snark aside, the sexuality of the video is beautiful and aching, and once again has that anticipatory tension running throughout. The camera and editing work again move with the beat of the song; as the bass drops, the scene that was playing is slowly backed up and replayed, and I’m sure it’s no accident that the playback stops just short of the moment where the viewer may be able to figure out what exactly is happening. Is he torturing her, or is she participating willingly? Is this post-argument or just how they always get down? Twigs appears calm throughout, but everything else is so charged, it’s hard to know what to think, and that’s clearly the point.

Based on these videos and Twigs’ admittedly small body of work, it seems her style both musically and visually points to an area of existence not often captured in the media, and almost never discussed: the moment between. That weightless second before the roller coaster takes off down the track, the choking up right before crying, that hopeless pre-orgasm feeling, and presumably the last exhale before dying, that can never quite be put into words. These are the seconds where life is truly lived; where there are no words, just feelings.

With her achingly pitch-perfect vocals, drawn out tempos, minimalist synths and disquieting graphic images, FKA Twigs is seeking to re-create these moments in some tangible way, and she does a brilliant job; pushing to the brink and drawing back so the audience can experience it on loop, and reminding us that what’s important isn’t the buildup, and it’s not the release. It’s the moment before the fall that life is at its most real, and Twigs has put these pieces together and slapped them up on YouTube lest we forget.

Even more interesting is that everything I’ve described so far about FKA Twigs would suggest that her style is homogenous, and one might become bored or even desensitized. Just as these “moment between” experiences are varied and feel different each time, so does Twigs’ style change and vary, and rarely take on the same form twice, even within the same video. To oversimplify to a disturbing degree, she’s definitely worth checking out.

“Water Me”and “Papi Pacify” are part of Twigs’ EP2 which is available on itunes for download, but I suggest you go to her YouTube page and watch all 4 tracks in the playlist:

They’re definitely meant to go together, as are the tracks in EP1, released in late 2012:

EP1 can be downloaded on Twigs’ page, where a vinyl version is also available. The vinyl for EP2 is available on her label’s site.  Look her up and get that pre-orgasm feeling all day long with FKA Twigs!