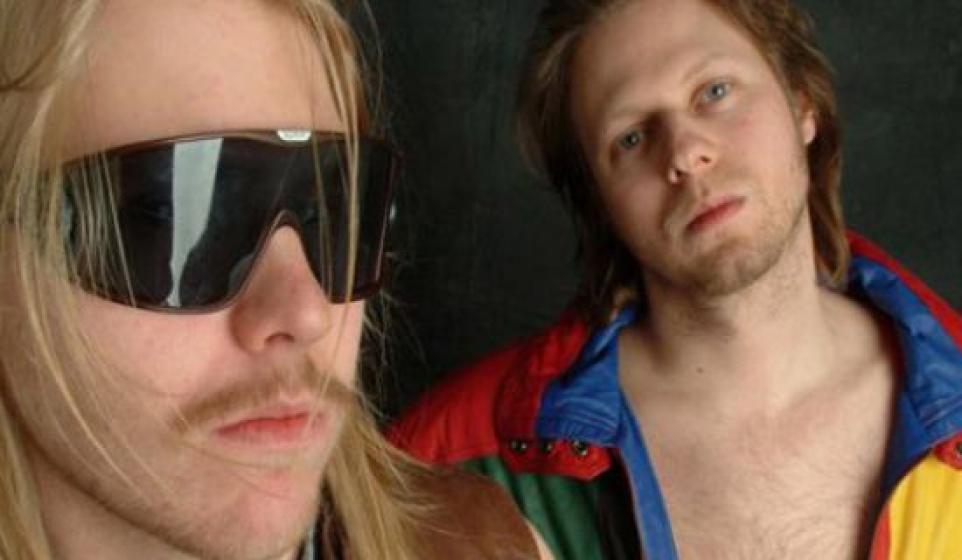 Ok, hear me out: Gil Mantera’s Party Dream started as a joke band in 1999 at a club in Ohio. When the main act failed to turn up, the drunken stepbrothers Gil Mantera (Glenn Whiteweather), Ultimate Donny (Richard Elmsworth) climbed onstage to cavort, strip, and generally offend people in their stead.  Sound like a BitCandy Best New Artist?  Sure!

Over the subsequent years, however, GMPD’s antics and moderately catchy 80s-style synth pop tunes began to garner them a following. To-date, they’ve released two full-length albums, Bloodsongs and Dreamlovers, as well as a number of EPs and singles.

GMPD’s shows are what make the band remarkable. With flashy clothes, fruit-smashing, audience harassment, and much more, they’ve toured a couple of times with GWAR, and their act was one of the few capable of standing up to that onstage madness, so that’s the level of crazy we’re talking about here.

The consistent vein that runs through GMPD’s shows comes in the form of Gil Mantera himself, a baby-faced giant who seems to have only been in the group in order to perform awkward balletic dance moves in wing-tipped shoes and little else while jabbing away at vintage keys, singing hooks through vocoder and chain-smoking American Spirits. The other thing you can count on is that at every show, these two will strip down to the minimum vestiges of clothing allowed by law. They normally start off in some horrifying nod to 80s fashion such as a turquoise unitard or gold sequined off-the-shoulder number, accessorized with anything from ski goggles to wrestling shoes. When watching their videos, you can then gauge how far along they are in any given show by what level of naked they are.

The element of the shows that’s always changing is Ultimate Donny. He is indeed the ultimate; ultimate Master of Ceremonies, ultimate front man, the ultimate representative of the Party Dream. Early on, Donny was prone to changing the lyrics of songs to suit his mood or because he was too drunk to remember them. The lyrics in “Bloodsongs” are daft enough, but  when you added Donny onstage wearing a pumpkin, twirling a clothespin around in his majestic mane of hair and replacing verses to “Blats from the Pabst” with things like, “Everyone gotta respect they own body! And if that means getting lots of blowjobs and fucking a lot, that’s respect.”  See the nutty performance video here:

Who even cares what the lyrics were at that point? As GMPD garnered more popularity and the audience largely knew the lyrics, Donny took to elatory mini-rants between songs, such as  their performance at the Rock and Roll Hall of Fame in this video clip:

“When Jabba the hut was sitting around, trying to figure out the best strategy to beat his aunts, uncles, and own children at Uno! and Sorry!…he came to the rock hall and his questions were answered.” Frigging genius.

So, why may you never see this paragon of entertainment? It’s because the band has been on hiatus since mid-2011, with rumors sliding back and forth about whether a reunion tour will happen. No one is really sure of the reason for the split, but it seems to be coming mostly from Gil, who’s largely disappeared. Donny is still active, now going by his real name and playing mostly local shows as a DJ and general wacky person with Lord Grunge. So, this amazing phenomenon may have already passed without you sorry readers knowing about it. There is hope, however. There are a number of Facebook campaigns to get the band back on tour, and currently GMPD’s Wikipedia page says that Gil may think about a reunion. At this point all we can do is pray and continue to campaign to bring them back. If nothing else, this article is an attempt to summon more fans to take up this mantle: Gil Mantera’s Party Dream must return! Here’s a full HD show of theirs just to further prove my point: