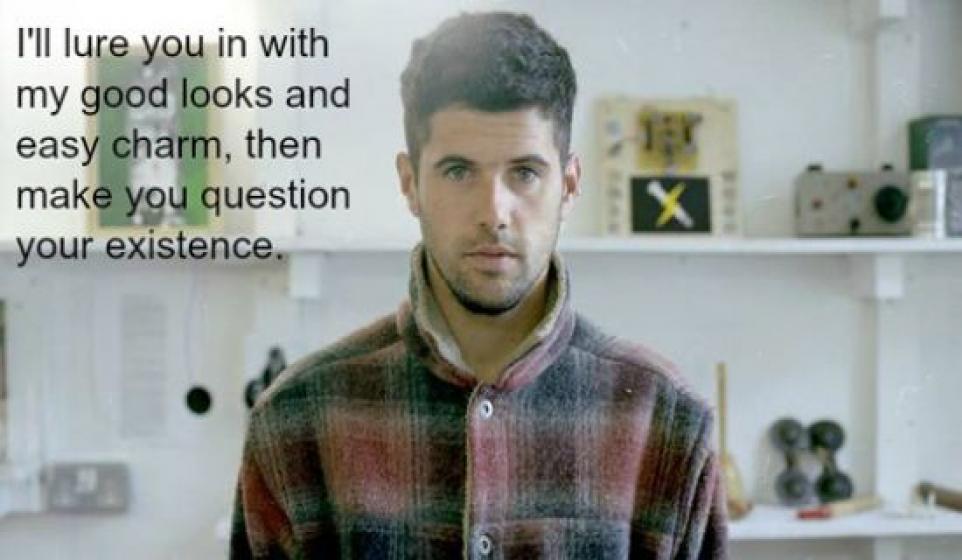 Ok, we all know I’m not always a fan of the single-male-vocalist-with-marginal-guitar-skills set. I always have this fear that they’ll turn out to be a horrifying douchebag on the level with John Mayer, and I can never get around the ukulele-esque guitar riffs, no matter how interesting or complex the lyrics.

There’s something about new artist, Nick Mulvey, however, that allowed me to put all that aside. Maybe it’s my rampant musical anglophelia that allowed me to give this stripped-down English singer a break, or maybe he’s just actually tangibly good, but I remain wary.  Clean cut looks and A&F cardigans? I have my eye on you, Mulvey.

Nick Mulvey’s sound seems to be of varied influences from the late 80s and early 90s. His vocals initially remind me of Richard Butler, but not Psychedelic Furs Richard Butler; more Love Spit Love era, as that project was more stripped down. I also somehow detect some hints of Indie Rock legends, The Stone Roses, but don’t ask me to pinpoint it.

He even cites ginger musical pariah Mick Hucnkell of Simply Red and Olive fame by quoting lyrics from Olive’s once-and-forgotten hit “You’re Not Alone” in his single, “Nitrous.” This Brit likes his British indie, that’s for sure, and I obviously don’t blame him.

Stylistically, I think I’ve already belabored the point that Mulvey is stripped down; in most of his tracks it’s usually just him and a guitar and a slight wisp of Moog (if Moogs can be wispy) for a backing track, so that is definitely minimalist. I think it’s the timbre of his actual vocals that allow him to transcend stereotypes. Just a little accented with a bit of Jack Johnson lilt but clearer, Nick Mulvey’s voice somehow cuts through and gets you listening.

It’s a good thing, too, because you wouldn’t want to miss his lyrics. The afore-mentioned “Nitrous” seems literally to be about Nitrous at first, but the listener will quickly realize it’s about the last few generations of kids being in a holding pattern, watching the current infrastructure do itself in from a drug-addled porch step, and waiting for our turn to do something about it. It’ll give you chills – I think all of us under the age of 35 have had a moment like this song describes. Mulvey describes this apathetic angst of tech-generation youth in a way that’s both political and apolitical, and it’s very effective to say the least.

Nick Mulvey’s music, in a nutshell, is a little to the left of coffee house indie, a little to the right of the hard-hitting alt rock scene, and lands comfortably in the middle, making a point without scaring too many people. If you want to sit in a breeze with a Country Time lemonade and a Xanax while contemplating the demise of humankind, Nick Mulvey is a good bet to add to cart.

Mulvey’s releases are largely in piecemeal at this point, though they’re all on Fiction Records; he’s got two EP releases listed on his website, http://www.nickmulvey.com: The Trellis, which was released in 2012, and Fever to the Form, released in June of this year.

“Nitrous” was just released in October and is available for free download on his page via a SoundCloud link, or just click here.  I say give it a try, and get ready for the softest gut-check ever.