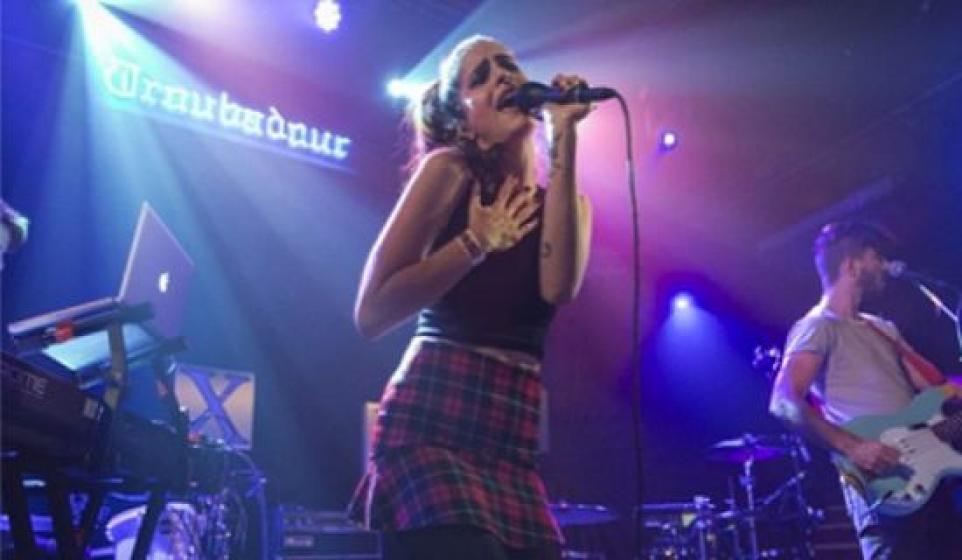 NEW ARTIST FIND: WE ARE TWIN

One of my favorite Mitch Hedberg lines is, "When I was a boy I use to lay in my twin size bed and wonder where my brother was."

New artist We Are Twin don't seem to take this as a joke. In fact, the Los Angeles-based duo seem to take it quite seriously. They're actually making it a part of their origin story.

The unlikely-to-meet pair claim to have the sort of Neuro Handshake I've always assumed actual twins do. As Brooklyn-born crooner Gabi Christine put it: "Our creative minds are identical. It's the most natural thing in the world."

If that's the case, I would have gone with the star-crossed lovers angle. But then again, when the music is this good, a rose by another name, etc.

WE ARE TWIN "THE WAY WE TOUCH"

German-raised Sri Lankan producer, multi-instrumentalist, and professional badassmotherfucker Nicolas Balachandran first met Gabi in 2009 for a songwriting session. The two left said session with fifteen songs. Now perhaps you're like me and are cynical upon hearing such a report. You assume this is nothing more than press junket nonsense meant to add mystique to the band. You're probably right, and you're absolutely an asshole. I mean who really gives a shit? Isn't it more fun to believe that Nic and Gabi (as everyone's calling them) are telepathically and perhaps metaphysically linked to one another?

Regardless of your answer, We Are Twin is a tremendous power pop band. So why do you have to be a prick about it?

WE ARE TWIN "TRUE LOVE (UNPLUGGED)"

We Are Twin describe their music, and possibly themselves, as 'International Power Pop.' This seems a little too confining for their sound, if I may. There are elements of noise pop and more than a healthy dose of indie here, but these elements never feel tacked on. They come about organically, adding layers of intrigue to go along with the music's pristine power pop core. There's a lot going on in all of We Are Twin's songs, but you never feel distracted. The more I listen to this, the more I think there's some symbiotic shit afoot.

WE ARE TWIN "DON'T TELL YOUR PARENTS"

Thus far, We Are Twin have only an EP to show for their kindred-spiritedness. The self-titled debut is five bright, shimmering tracks that please the ears. We Are Twin was released this August via A&M/Octone Records. Christine's vocals soar on every track, with a brand of stank (to steal some soul lingo) that's sure to be compared to Amy Winehouse. The comparison is accurate and unavoidable. Let's hope it isn't used to pigeonhole the band. Balachandran's music makes certain the listener doesn't mistake this for any of Winehouse's music. His talent is truly a thing to behold. Pick up the EP now on iTunes, or if you're broke head to their soundcloud page to stream it.

Whether or not they're actually Twins, we're excited to hear whatever We Are Twins serves up next. Thanks to Curator Pucken for this new artist find.