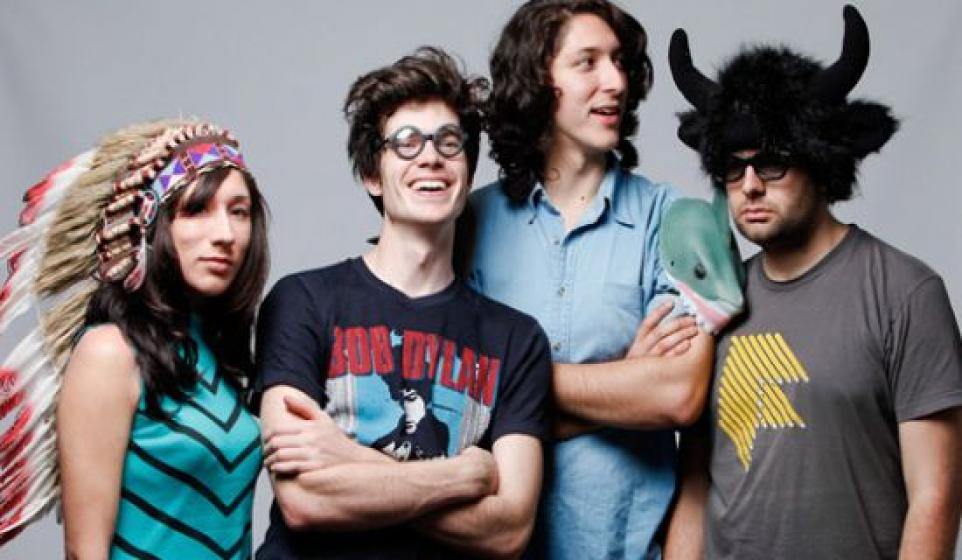 Hailing from the picturesque Blue Mountains of Australia, emerging artist Cloud Control are made up of three chill bros (Alister Wright, Ulrich Leneffer, Jeremey Kelshaw) and one seriously chill babe (Hedi Lenfeffer). According to apocrypha, the group formed when they decided to enter a Battle of the Bands competition after a series of escalating and hysterical events led the quartet to meet in the green room during rehearsals for The Pirates of Penzance.

Or, if you're one of those people who believe you shouldn't print the legend, Cloud Control is made up of four musical theatre nerds who met in high school.

Regardless of which origin story you believe, or what modifiers you attach to them, this much is clear: Cloud Control is a kickass indie rock band who's rounding into form. They've nearly conquered their own continent, leaving an undeniable mark on the music scene down under. Now they seem ready to move on to the other six, slowly weakening the resolve of the world's citizens with a steady dose of infectious psychedelic surf rock. The group recently relocated to London and are looking to duplicate the success they had at home in the UK.

Eventually, I'm pretty sure Cloud Control is going to rule us all.

Like all great stories, Cloud Control's has its share of adversity. They did not win that initial Battle of the Bands. In fact, the group is quite candid about just how raw they were when they first started out. However, the enthusiasm for their music kept them going. Eventually Cloud Control got a whole lot better and self-released a debut EP. A single picked up some significant airplay and the band was chosen by Supergrass to open for them when they toured Australia. This started a long and illustrious history of Cloud Control opening for more notable acts, while more than holding their own in doing so. The group has increased their ever-tightening stranglehold on the island by opening local shows for such acts as Arcade Fire, Vampire Weekend, Weezer, Local Natives, and several others.

While international stardom seems to be peaking around the corner, the quartet have exploded at home, becoming one of the most prominent acts in Austalia this decade. They've been nominated for a grip of awards, including the 2011 Australian Music Prize, which they won. Now I'm a xenophobe and have no idea what the Australian Music Prize is, but as a rule of thumb it's a good thing when you win an award that has an entire continent/country in its title.

But who knows for sure, I've heard they do everything backwards out there.

While the comparisons to who Cloud Control sounds like are numerous and varied, no one seems to agree on just who these cats' contemporaries are. A big reason for this is that this is still a very young band who's just now starting to find themselves. Another part is that even though their influences are plentiful and prominently on display, Cloud Control just sounds like themselves. They have a unique brand of psychedelic surf rock, filling endless hours of tape with warm, mono sounds.

Like the music they create, Cloud Control's influences don't come from the most likely sources. Wright's vocals at once recall David Byrne, Paul Banks (Interpol), and Taylor Rice (Local Natives). And the influence Stephen Malkamus's axe work has had on the group is evident immediately. In the end, the band perfectly melds classical, in the indie sense at least, and contemporary elements to create a sound that seems to be hitting its stride, as evidenced by 2013's excellent Dream Cave.

Take note, this isn't the last time you'll be hearing about Cloud Control.

CLOUD CONTROL "THERE'S NOTHING IN THE WATER WE CAN'T FIGHT"

We're revolutionizing the music game here at Bitcandy. You go find obscure or unknown artists like Cloud Control, and then we pay you for said discovery. It's simple, easy, and you're a damned fool if you don't do it. Become a Bitcandy Curator right now!