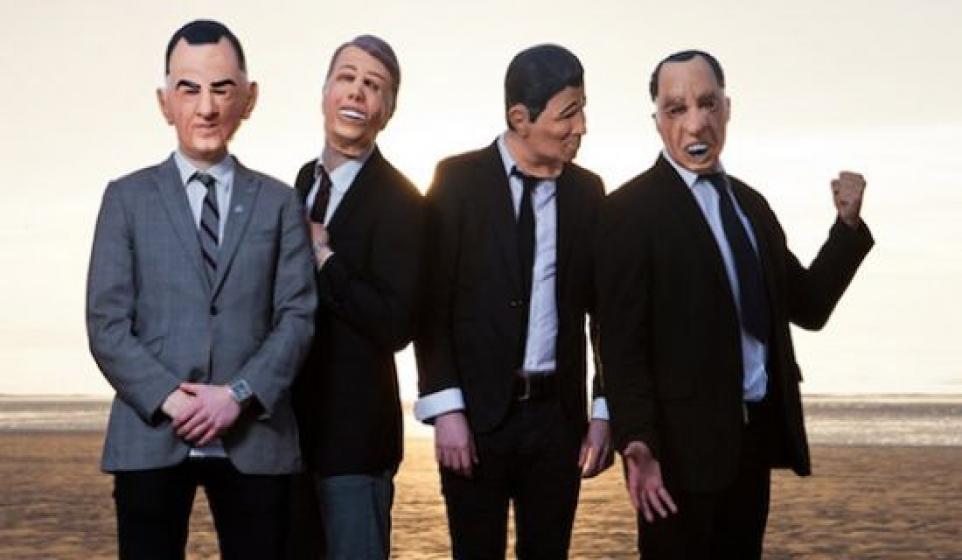 The two things everyone mentions when talking about the exciting new artist Le Galaxie is their ceaseless work ethic and their heart-stopping, feet-stomping, face-melting, religious-experience of a live show.

One thing that tends to get lost or muted in all this noise is just how damned great the band's music is:

With a unique blend of guitar rock and stratosphere defying electronica, Le Galaxie seems to have invented and perfected the 'grids vs guitars' genre. The Irish quartet first started making waves in 2008, when they self-released the guitar-heavy dance floor anthem "We Bleed the Blood of Androids," which got some love from Irish Electronic community. In 2011 their debut album, Laser Discs Nights 2 (which is available for free download on Le Galaxie's Bandcamp), added to the momentum the band was gaining from their head-turning live performances. For a group of atheists (if their 'Liked Videos' section on Youtube is to be believed), Le Galaxie's live shows take the from of a religious revival for their fans. Thousands of concert goers scream and writher in ecstasy (or on it), lifting to their hands to the heavens, overcome by a state of worship.

The band's first true 'a-ha' moment came when their set at Electric Picnic in 2011 became the talk of the festival, and really of Ireland's music scene.

Everyone who's seen Le Galaxie's one of a kind live show agrees on two things: 1) That's it's one of the best shows of any genre they've ever seen, and 2) These guys are about to blow the fuck up.

Their current manager, Joe Clarke, started out as one of their concert-going-disciples, calling them the most exciting live band he's ever seen.

"Asking what attracted me to Le Galaxie is a bit like asking Anna Nicole Smith, ‘What first attracted you to the multimillionaire...?’"

Le Galaxie followed Laser Discs Nights 2 up with the stunning Fade 2 Forever EP, and their sophomore LP is due to drop this year. Their live shows continually are the highlight of everyone's festival-going weekends. The boys feel primed for a major breakthrough in the UK and the rest of Europe, if they haven't already. Up next is the international stage, which, if it knows what's good for itself, will welcome their energetic and exuberant performances with open arms.

These cats are a ticking-time-bomb of stardom. Get your seats on the bandwagon now, because there won't be any left in a minute.

The Curator to end them all, Duffster, chirped in our ear about just how fucking awesome Le Galaxie is. We paid him for this information. You should probably aim to lead a life that is more like Duffster's regardless, but you should start by becoming a Bitcandy Curator.

Or you can continue to be someone who sucks at life. The choice is yours.