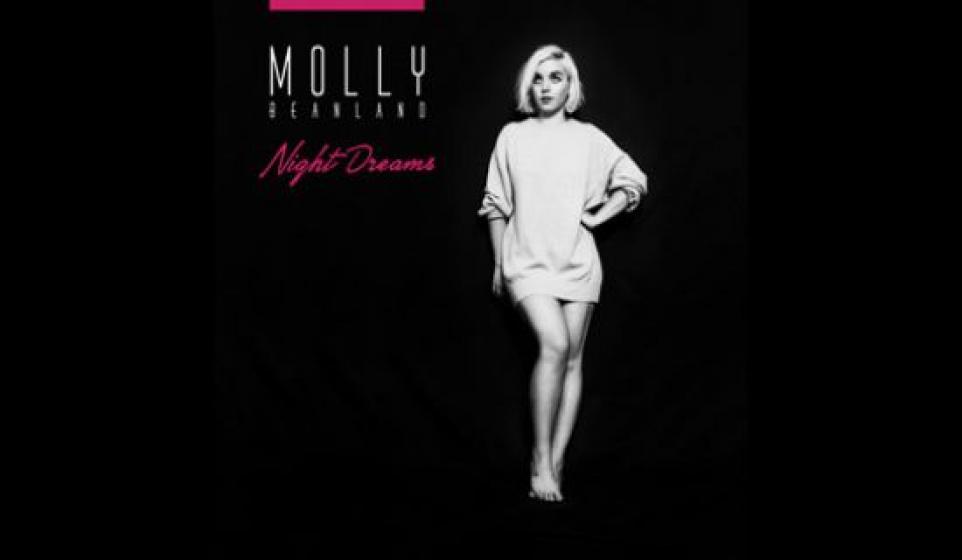 Anyone else sick of Grimes? I’m pretty sure without even seeing you that the “ayes” have it on that one. She was fun for a minute, but really all the buzz, at least in my mind, was more about the ultra-freaky Brooke Candy rocking her weird calf-length pink dreds, metal catsuit and white contacts in the “Genesis” video. It was freaky and fun, but I tire of Grimes’ pale, elbowy ambient chittering. I wish there would come along a female singer/producer who was truly fun, and maybe could keep us from rolling our collective hipster eyes for more than 6 months, don’t you?

Enter Molly Beanland. Fun is definitely the operative word on first listen to her, especially if your first exposure is the new video for the single “Night Dreams,” which, let’s face it, could easily be called “Wet Dreams.” See what I mean here:

The video will remind you of Washed Out’s video for “Olivia” with lots of sexy 80s movie shots, but with a decidedly female orgasm bent. I suppose that even more accurately, the song should be called “Lady Night Dreams,” as the subject matter of the prettily sung lyrics is also about such things. It’s a refreshingly modern and feminist take, while using the movie clips to drive the point home.

The fun doesn’t stop there with Beanland, however. It looks from her SoundCloud page that this UK-based singer/songwriter/producer started off as a dreamstep DJ, as her first posts there are full-length mixes/fave tunes compliations. You can check one called “I Like This” here:

More recent is a string of one-off singles and remixes which have varying styles.

The one constant, other than F-U-N, is Beanland’s pixie-like yet clear as a bell voice, which she manipulates with effects to varying degrees around the needs of each tune. All the tracks are Beanland originals, and musically they are very sophisticated. Though they run the gamut of electronic styles, there is a decidedly 80s theme to all her work. In some cases, such as “Night Dreams,” she’s so seamlessly nailed that time period with her synth work that one could be forgiven for thinking the song was actually made in the 80s while watching the video. The closest thing I can relate it to is oh, let’s say a dreamier Berlin (“Riding on the Metro” Berlin, not “Take My Breath Away” Berlin). If that’s hard to picture, maybe the description on her Facebook page will help: “…a shotgun wedding between Bauhaus and Fischer-Price.” I mean what is more fun than that?

Let’s hope Ms. Beanland continues to softly and sexily rock New Wave style until she’s picked up by a label, because she should certainly have at least one EP, if not many. Keep your eye on this one, because she’s poised to kick Grimes’ ass, both musically and literally.